The Thursday Night gang was short a couple of players this week, so they were kind enough to let me join in their fun and even let me pick the game.  In fact, we worked it out in advance and everyone had the chance to familiarize themselves with the game, Hansa Teutonica (2009), before we arrived.  I had played once before but JP, Cera, and John were all new to the game though you couldn't tell it by the way anyone perfomed.  We played twice and the final scores were tight.  It's definitely a game where there are a lot of paths to victory and everyone needs to make sure that no one exploits one path unimpeded or unchecked.  JP set the tone by immediately horning in on trade routes, so we all followed suit and were not squeamish or worried about stepping on one another's toes.  We played twice and it got more raucous as we went along.  It's a game that demands interaction so if direct confrontation in a non-wargame boardgame makes someone uncomfortable, this game is not for them.  Otherwise, it's a free-for-all! 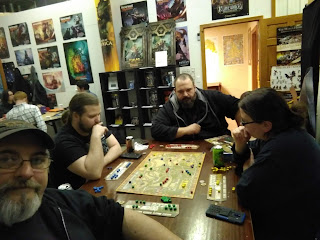 I find it odd that the opportunity to play Sushi Go (2013) hasn't presented itself to me in the past but every now and then there's a game that I miss without having dismissed it.  We opened our Friday with a this gem.  Sushi Go is a fast little card drafting game with no small amount of scoring and signal-reading complexity.  The more clever your opponents, the less light this game will play.  We had a fairly-even crew, myself being the only new player, and we played a couple of times through and I managed to be in the mix the second time.  Higher scores are had by taking some risks but this also means that the scores can swing wildly from round to round if some players are making unorthodox drafting choices.  This isn't a bad thing because that opens the door for a slightly more conservative strategy.  A player definitely needs to pick their moments. 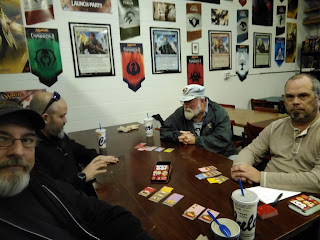 I forgot to snap a picture but we also got in another game of New Frontiers: A Race for the Galaxy Board Game (2018).  This one has been tough for me because I keep finding myself surprised by the final scores and also find it hard getting my game engine started if the combination of my starting world and the random development cards don't present some intuitive synergies.  I might not be giving myself enough credit because my final scores range from competitive to very good but during gameplay I often feel like I am foundering and waiting for some lucky break rather than steering my own course and mitigating bad breaks.  I can deal with the latter but hoping for some random mechanic to allow me a chance to win is frustrating to me as a player who likes more control over my own fate.  I'll still play this again but if I get the same feeling next time, I'll probably avoid this one in the future.
Posted by Mark CMG Clover at 8:00 AM No comments:

A Game of Thrones Catan: Brotherhood of the Watch

I've played two games of A Game of Thrones Catan: Brotherhood of the Watch and found them both engaging.  I think I need to adjust my strategy a little and become a bit more aggressive for territory and Development cards as I do in the regular game.  I'm holding back too much in deference to the collective Wildling threat. Posted by Mark CMG Clover at 8:31 AM No comments:

I had a wonderful time playing Viticulture in the new gaming and work shed of my pal, Wendy*, on Friday. 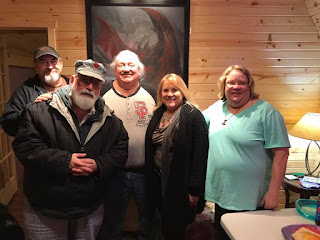 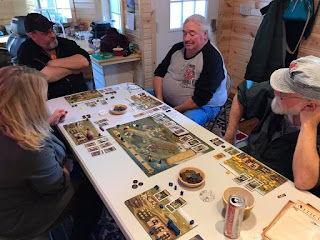 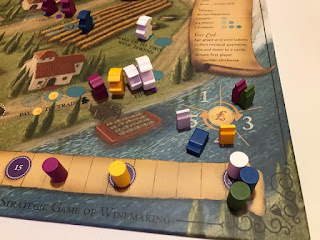 Three-way tie decided by tiebreakers and won by Wendy!

*All photos by Wendy and [her] Tom
Posted by Mark CMG Clover at 11:33 AM No comments:

GoT 7x07 Behind the Scenes @ Dragonpit

As I look forward to the final season of Game of Thrones, I've been enjoying going back and watching some fun stuff from earlier on including a video which shows some of the best of times for many of the actors on the show.  Enjoy!


Posted by Mark CMG Clover at 9:00 AM No comments:

After some consideration I decided to pick up a Blue Blackout Yeti USB Microphone in a bundle that included a Knox Gear Studio Boom Arm, Knox Gear Pop Filter and Tascam TH-03 Headphones.  While I won't be using the boom arm right away, the pop filter and quality headphones will come in handy.  I'll run some tests with it today before plunging in to making episode two of Tabletop Gaming Talk.  Thanks to everyone who chimed in with suggestions on what equipment to research. 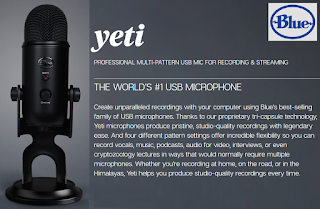 Posted by Mark CMG Clover at 7:58 AM No comments:

"Evening 1E AD&D Game! Exploring the Dragon's Teeth - This is a 1st Edition AD&D game run by Mark CMG Clover from 7 pm until 10 pm. The adventurers will sally forth onto the Trackless Moors to explore one or more towers known as the Dragon's Teeth. Open ended sandbox play where the players determine the direction of the adventure." 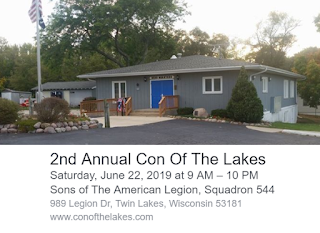 Posted by Mark CMG Clover at 4:42 PM No comments:

One Month til GM's Day! 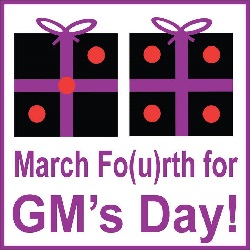 Posted by Mark CMG Clover at 10:00 AM No comments: