Posted by Mark CMG Clover at 10:46 PM No comments: 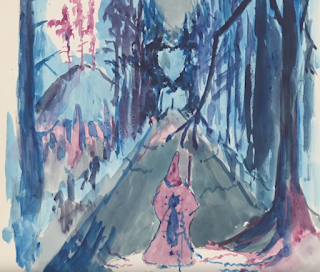 A recent article on Open Culture reminded me about the exhibit called Tolkien: Maker of Middle-earth.  It is the latest deep delve into J.R.R. Tolkien's archives for previously unpublished and, to the wider world, unseen materials including early drafts and original drawings.

The exhibit spent late last year at The Weston Library but now a great many items from it will be moving from Oxford to New York's Morgan Library & Museum before then traveling to France.  It opens here in the states in less than two weeks so make your plans to see it if you can and let me know how it goes!

Posted by Mark CMG Clover at 8:00 AM No comments:

It's been a couple of weeks since my return to blogging after over two years and I've made some headway on a few things.  I've gotten a few bits and bobs ready for a new podcast: an intro, outro, and some music and such.  More on that soon.  The store is geared up for for the next MtG release and we've seen quite a few preregs for prerelease weekend, which is always a good sign.  It's great to start off a new year with a strong month.  But I wanted to blog this time a little regarding the 1E AD&D campaign I am getting set up.

Next week will see the first gathering for our new group.  I know everyone involved, mostly from online though I've met almost everyone at least at a Gary Con or around the store.  I have a couple of returning players that were part of a campaign from a few years ago, so I'm glad they've got time to join.  But the eight or nine other players will be new to my table and DMing.  I set up a secret Facebook group to share some maps and preliminary information about the rules we'll be using.  It's mainly 1E core three with a bit of other stuff added in as we go.  Pretty straight forward but that's good for a new group, I think.

We'll be playing in my Grymvald setting, sandbox-style, but I want to make sure I have some early options so I've shared some of my old maps and have made some adjustments to some Dyson Logos maps for the starting area.  It's a village called Holdmarch, at the west end of a causeway that stretches east to the capitol of the Kingdom of Jals.  They may not stay in the area but considering the Listless Marshlands lie to the north and the Trackless Moors border on the south, there's plenty to do in any direction they decide to go.  I'll be sure to blog more about this after we're up and running.  In the meantime, keep gaming! 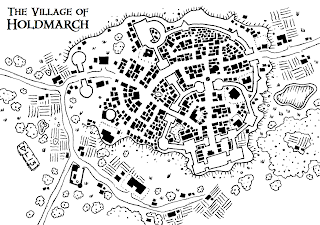 This is a modified version of
Cartography by Dyson Logos and is licensed under a
Creative Commons Attribution 4.0 International License.
Posted by Mark CMG Clover at 7:15 PM No comments: