No Denying It in the Grymvald 1E AD&D Campaign

Well, the group was left frozen in time the previous session as they needed to decide if making a strategic retreat and leveling up outweighed whatever advantage they might have from surprising the cultists of Marak Tor.  They had carefully approached, caught a few unaware and dispatched them, but at least one had gotten away after noting some arrow fire and a cleverly laid trap.  If they charged in immediately, though with some party members not in attendance, they might gain some advantage early on but they also knew the numbers were heavily against them.  In the end, as their first act after restarting the clock this time around, they headed back to civilization to resupply, gather more of the group (ten players this week!), level up, and report what new information they gained.

But they would not be denied and returned to Marak Tor stronger than ever.  This proved to be a wise move because although the cultists knew they were returning, and set up an ambush and a further choke point, the adventurers withstood what was thrown at them and cleared their way down to the main temple, defeating nine more cultists along with ten of the personal bodyguards of the Witch of Dour Haven.  Though she had a hand in the battle, heating up the armor of one of the top fighters and adding green slime obstacles in the group's path, the temple defenses were not strong enough to keep the party from a victory.  Now with the temple secured, what lies behind the scenes needs to be discovered, the witch needs to be located, and whatever else might be awaiting the brave adventurers must be faced.  I wish them well . . . 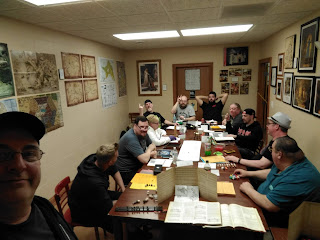 Posted by Mark CMG Clover at 10:52 AM No comments:

Busy with the Boardgaming

It was a busy first half of the week with some boardgaming and some AD&D (posting on the latter soon).  It's been a while since I played Kingsburg so I got it down off the demo shelf to show it to Jesse when we had a little time on Monday evening to check it out.  It was the base game and very close at the end, just a few points between us. 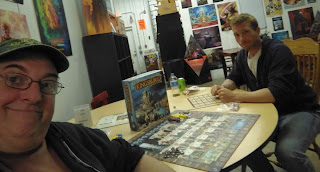 Tuesday saw some visiting gamers in town with Dave Conant and Jim Ward joining Tom and Ernie, as well as Brad and myself, for a few afternoon games including San Juan (using two copies of the game to increase the player count). 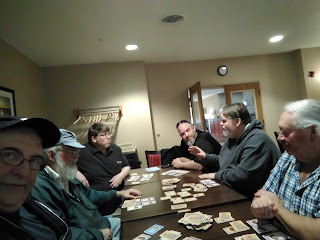 We also played a Tom Wham classic, made manifest through the Game Crafters as guided by Dave, called Felithian Finance, a Sci-Fi stock market game. 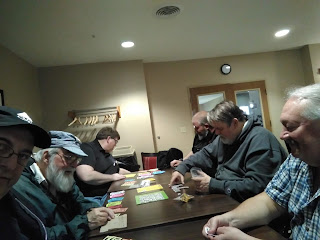 And we finished up with Architects of the West Kingdom, a worker placement game I've mentioned on this blog not long ago. 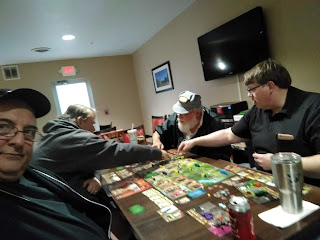 A good week for gaming, indeed.
Posted by Mark CMG Clover at 10:33 AM No comments:

The largest group we've had in a while for the 1E AD&D game in the Grymvald setting with eight players in attendance, one still on vacation but a new face in the mix.  Welcome to Jesse!

Last session, the party finished their side trek to the Caves of the Deaddrop Clan.  The goblins had recently secured a long-abandoned hidden Dwarven outpost to use as weapons manufacturing facility and general HQ for other tribes wishing to raid the settlements along the northern causeway.  The adventurers nipped the goblin plans in the bud and gained some undiscovered Dwarven treasure for their efforts, though not without some losses and injuries.  Details of the battles, and tough consequences, came in my previous campaign blog posts but I should mention magic armor and weapons were garnered and some leveling took place. 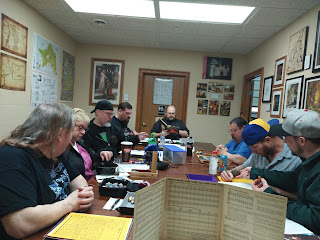 This latest session, however, saw a considerably more systematic approach to the site of their original adventuring, Marak Tor.  The cultists seemed fairly entrenched but many of the obstacles to dealing with them had been cleared away or figured out.  They had a fairly good idea of what they would be facing and did their best to avoid incidental injury along the way toward their goal.  They had some fun removing a nasty slop bucket trap, then resetting it elsewhere with the addition of some flasks of oil, which was tripped to good effect, taking out a couple of cultists (a third dying to bad luck).  They also managed to lead an owlbear and her two chicks-cubs (the players dubbed them "chubs") to the tor and upon a couple of other cultists, one of which was a goner.  Unfortunately, they had underestimated the population below.  After finally venturing back within, they chanced to discover a previously unknown secret door which revealed a larger temple complex than formerly reckoned and considerably more cultists than expected; dozens more! 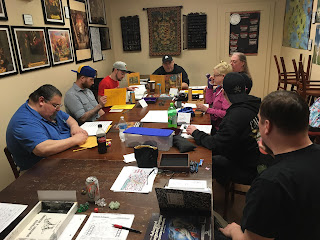 The group reconsidered but with the evening winding down we chose to freeze time before they moved off and gave the cultists a chance to regroup or reinforce.  It's a tough call.  They are seemingly outgunned but know the complex much better than they did when they first came upon it seven or eight games ago.  The rewards could be great but the danger is undeniably tougher than they can hope to overcome without some serious losses.  I do not envy them their decision . . .

Posted by Mark CMG Clover at 10:47 PM No comments:

Architects of the West Kingdom (2018)

One of the downsides of working in a game store is playing a lot of nifty games that we just can't keep in stock!  One of the more recent culprits is Architects of the West Kingdom (2018) by Garphill Games, Angry Lion Games, Banana Games, Ediciones Primigenio, Fever Games, Meeple BR Jogos, PixieGames, Reflexshop, Renegade Game Studios, and Schwerkraft-Verlag (all according to Board Game Geek).  It's a strategy game for one to five players that involves Card Drafting, Set Collection, Variable Player Powers, and Worker Placement.  It has a lot of interaction and ways to disrupt the games of others even as you advance your own.  It's a colorful board with a lot going on but it is not difficult to keep track of anything and the iconography helps a lot in that regard.  A few of the building cards might do with a bit more explanation but we think we have figured them out.  I've played five or six times now, counting a double header today with four then three players, and I daresay I will play this more in the future.  Good stuff! 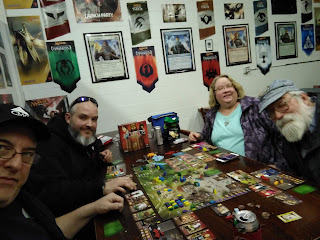 Posted by Mark CMG Clover at 5:06 PM No comments: