The Work of Ray Harryhausen: A Gamer's Perspective

With the impending release of the Ray Harryhausen film/documentary, Ray Harryhausen: Special Effects Titan (2011), later this summer, I thought it would be fun to explore some of  his body of work and review those films through the eyes of a gamer.  I will be obtaining a number of the movies through Netflix and some I have in my own collection.  When I have a film on DVD with a case, additional information, or extras, I will try to include some details but mostly restricting myself to when the material is pertinent to the interests of me as a gamer or to me as a Harryhausen fan. 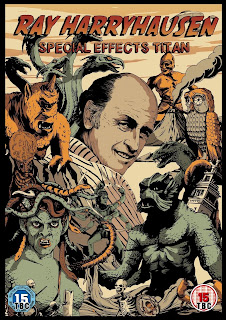 Although the full merits of the particular films can be debated, I'm a fan of all of Harryhausen's works.  I'm not blind to the flaws, I just love the style so much that I can look past them.  I won't be writing individual blogs on his short films and earliest work, nor full blogs on films where he had little involvement or limited amounts of special effects such as Mighty Joe Young (1949), It Came from Beneath the Sea (1955), The 3 Worlds of Gulliver (1960), and First Men in the Moon (1964). While there is merit in all of Harryhausen's work, the aforementioned do not offer much or enough for me to write regarding their use for gaming, with the possible exception of Gulliver, though the use to gamers in that film has more to do with the original novel, in my opinion.

Out of his entire body of work, I am choosing to give my perspective on just nine films with which Harryhausen was involved: 20 Million Miles to Earth (1957), The 7th Voyage of Sinbad (1958), Mysterious Island (1961), Jason and the Argonauts (1963), One Million Years B.C. (1966), The Valley of Gwangi (1969), The Golden Voyage of Sinbad (1973), Sinbad and the Eye of the Tiger (1977), and Clash of the Titans (1981).  I will take them out of chronological order with One Million Years B.C. first, then Mysterious Island, and then The Valley of Gwangi.  There are interesting ideas in each of these three but other works have a great deal more for me to discuss.  After those I'll look at 20 Million Miles to Earth, in particular with an eye to what Harryhausen brought to Ymir, the animated alien character.  I'll follow that with a look at Clash of the Titans, with some comments on the recent remake.  The home stretch will be the four films I think give the most fodder for gaming, The 7th Voyage of Sinbad, Jason and the Argonauts, The Golden Voyage of Sinbad, and Sinbad and the Eye of the Tiger.  All of the four are rife with elements that any RPG Game Master should find inspirational.

*edit* You can now this program on Amazon Prime (for FREE if you're a member) here.