This month's RPG Blog Carnival is being shepherded here on the CMG Blog Triad and the topic is "Convention Gaming."  Folks can keep track this month by following this post.  I'll even add links for subsequent parts in the comments section below where readers will also find links to the many blogs participating this month.  To follow the RPG Blog Carnival each and every month, visit the new topics page and archives for the RPG Blog Carnival on roleplayingtips.com.

This month on the RPG Blog Carnival, the focus is on "Convention Gaming."  This seems appropriate since Gen Con Indy is currently in full swing and is the biggest RPG convention in North America (perhaps the world?).  I've been attending Gen Con off and on since the mid-1970s and the gaming at these events can be awesome.  I'm not there this year, unfortunately, but I am sure everyone is doing their utmost to have the best four days in gaming, as the slogan suggests.  There is always a ton to do and see and if you cannot find games to play at Gen Con, you're simply not trying.  Or, more likely, trying your best to avoid them.

The number of topics a blogger could find to write in regard to Convention Gaming is broad and diverse.  One might choose to write about running games at conventions, or playing in them.  Finding a game or working out a good schedule might be worthy of words.  Game prep for conventions is every bit as important as running or playing, for both GMs and players.  There are even many tips one could give on the best comforts and amenities to secure to maximize your enjoyment during convention play.  I'm going to focus on GMing, since that is what I tend to do most often and what I love doing most of all.

One of the things to get used to when running a convention game (or even games at smaller events like gamedays) is playing with strangers.  It may even be that none of the folks at the table know one another.  It helps a great deal to have pre-generated characters in these situations.  Ask the players to sift through them and for each to choose one.  While it might seem efficient to have only enough characters for the number of players, I find having a few extras allows all of the players a chance to be sure they have something with which they can play comfortably.  If one or two of the characters are integral to the scenario, be sure to mention that up front.  There are always players ready to grab the indispensable personalities.  If any character is desired by more than one player, have them roll off and perhaps throw a little something extra to the player who doesn't win their first choice.

Once characters are selected, go around the table and ask the players to introduce themselves and their character.  Some GMs even provide placards for the players that includes the character name and a place to write their own name as well.  These can also be made ad hoc with cardstock or folded paper.  Keep this process moving quickly so that you don't cut into too much of the adventuring time.  With experienced convention players, they'll be ready to jump right in so be sure to swiftly answer any questions new players might have.

Some players will want to make changes to their characters or their gear.  I'd advise against it.  Allowing even minor changes for one player can cascade around the table.  Before you know it, you're a half hour into your time slot and haven't even begun in earnest.  An experienced convention Game Master will have things up and running in ten minutes or less but don't worry if it takes a little longer when you're new to the process.  Now that the characters are sorted and the players introduced, you can start.

Flashing back to when you were prepping, there is always the danger that you've not prepared enough or have so much material lined up that the time slot will not accommodate it all.  Not having enough material can be very problematic unless you are a GM who can stretch without it being obvious.  This is a rare GM, indeed.  If the players feel you are throwing up road blocks to impede their progress or adding in last minute red herrings to keep them from completing their mission, they will find the session unsatisfying.  You're better off ending with the prepared material a little early with happy players than beefing up the hit points of every creature or adding lots more of the same old monsters just to fluff up what you have.

Once, I had a group of players who worked so well together they greatly exceeded my expectations and the final planned encounter was overcome with a half hour left in the time slot.  Rather than try to fake my way through, I fessed up to the group and they were actually pleased that they had surprised me by doing so well.  A couple of the players were happy to have a bit of a  break before their next game to grab a bite to eat and the others rehashed the game and enjoyed that almost as much as playing through the adventure.

So, too, having more material than can reasonably be tackled in your allotted time can be a curse or a blessing.  While it is true that forcing players along a path so that everything is encountered or winding up the game with an encounter that clearly doesn't inspire players to feel they've reached a finale is going to leave them unsatisfied, at least with an abundance of material you can find ways to trim it on the fly.  Not long after the session that ended early, I began setting up convention games that were ready to be trimmed by design.

The formula is simple.  For a start, you know you want an opener that gives the players their mission for the adventure.  While I run campaigns at home as a sandbox, and prefer it that way, convention games require more focus.  There's no time for the players to be foundering just to get their marching orders.  Even those who run a sandboxy type of convention game make sure to get the players into the action quickly.  If you've spent ten minutes of a four hour time slot getting the characters in the hands of the players and you spend more than twenty minutes getting them to dive in to the meat of the adventure, you're going to find it difficult to fully crescendo and hit some true high points.

Once I've sorted out the pregens with my players, I like to begin a convention game in media res.  I put the player's characters right into the action and then throw in some extra information during the narrative descriptions.  This information will help the players understand where the characters are, what they are doing there, and what it is likely they will be planning to do if they want to achieve the goals of the adventure.  Just a year and a half ago at Gary Con, I ran an adventure where the players began the game working their way through a mountain pass in the early morning only to discover that an army of pig-faced orcs was coming in the opposite direction with two mammoths tramping along in their lead. 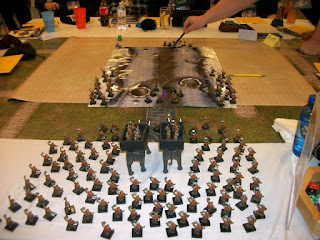 As they began to make their plans I was able to slip in information about the lay of the land beyond and how they'd have to make sure to deal with the orcs quickly if they hoped to cross the icy plain on the far side and arrive at an outpost before nightfall.  I made sure too mention that camping on the plain was fraught with perils best avoided like frost giants and winter wolves.  Without any assurance the army would simply march on through if they hid and waited it out, they decided fighting was their only option.  While they were hunkering down and taking up positions to fight off the army, I was able to "remind" them of what their characters hoped to find at the outpost.  Although the orcs were many, and there was a danger of being overrun, they discovered their characters had plenty of fight in them and more than enough wits to drive the host back out onto the plains, fleeing in all directions.