Events & Play Wednesday - The Return of the Wham

Tom Wham got back in the gaming saddle yesterday and requested we play a local favorite, Augustus (2013).  Ernie and Paul joined lunchtime regulars Brian Blume and Mark Meier, so we had six players around the table for this homecoming. 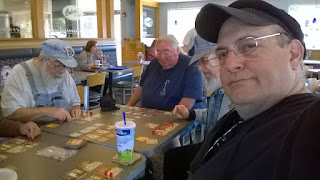 The description from Board Game Geek is as follows:


In Augustus, you vie with your fellow players to complete "objective" cards for special powers and ultimately for victory points. Each card has 2-6 symbols which you must populate with legionnaire meeples in order to complete the card. These symbols are drawn one at a time from a bag, with all players gaining the benefit equally, but interestingly, the bag contains more of some symbols than others.

So the pivotal skill you'll deploy is in making your choice of which three objectives you'll start the game with (you're dealt six) — balancing potential difficulty of completion against value of the reward — and then which of five available objectives you'll add to your plate each time you complete one of your three. The game ends when someone completes seven objectives. 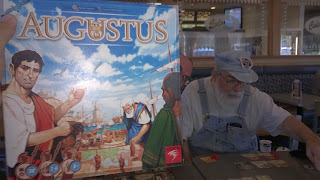 It's a straightforward card game with some bingo-esque features combined with worker placement.  It plays fairly quickly though we had a couple of false endings when detrimental cards stymied the end trigger.  In the end, Tom acquitted himself well and seems quite ready to return to his old form.  Welcome back, Tom Wham! 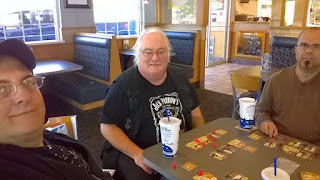