The Friday Grab Bag - All Good Things Must Have a Beginning

It has been quite some time since last I posted here on the blog and a lot has changed.  2019 ended and 2020 began, my 1E AD&D face-to-face campaign came to an end, I started a new streaming vlog called The Okay Grognard Show, and a global pandemic forced Gary Con to cancel along with every other gamer gathering that would have taken place worldwide.  If the last part of that sentence is news to you, maybe you need to pay closer attention.  There's not much I can personally do about the global pandemic other than my part, to shelter in place, so this blog post will focus on the aforementioned gaming things.

The Okay Grognard Show has become one of the new ways I am interacting on the Internet.  It's mainly a Twitch-based streaming broadcast whose content changes with my needs.  I've done some follow-along Photoshopping of maps and illustration coloring, chatting with house-bound friends while becoming better acquainted with Roll20, the online RPGing software, and I've taken a walk down memory lane while checking out pictures from the early Gary Cons.  For those interested in doing something similar, I downloaded some software from OBS, set up a Twitch account (did this part years ago), and began sharing content.  It's that simple.  We'll see if any of it proves watchable as I become more proficient and comfortable with the process. 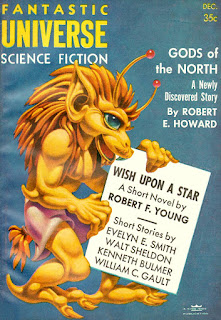 Another activity I'm including in the stream has been live, casual readings of literature from the public domain.  In my first effort, I chose Robert E. Howard's Gods of the North (AKA The Frost Giant's Daughter).  There were a few stumbles but that's the nature of a live performance and if I recorded it and tried to make it perfect, like an audiobook, it would become a much more involved process, one I have no time to handle.  My every waking moment would have to become about nothing but the readings and I only want that to be a portion of what the Show can do. 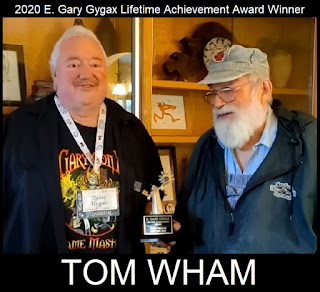 By the by, Tom Wham won the 2020 E. Gary Gygax Lifetime Achievement Award and I am hoping we'll get to game together online, as if we were at Culver's, using some sort of online platform.  Zoom seems to be a questionable choice right now because of some vulnerability issues that need shoring up but I'll give him a call later and see what is possible.  I know Wendy is ready to go with several possibilities and Brad is game to try something, anything.  We will see. 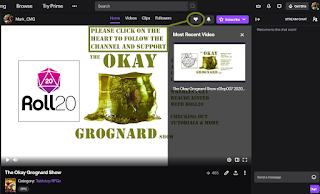 I'll be spending much of the next few days becoming even more familiar with Roll20.  It's likely the best way forward for running 1E AD&D games in the near future and will require me to learn a lot in a very short time.  If you have any suggestions for tutorials, I've had some suggestions and I'm already absorbing them, but keep them coming!  I can use all the help I can get.  In the mean time, get yourself a Twitch account if you don't have one already and go to The Okay Grognard Show channel AND FOLLOW.  It's an easy, and free way, to support the show and help me with whatever I am doing.  More to come . . .