Many have already heard the awful news that there was a fire in Lake Geneva early Sunday morning that claimed the apartment and possessions, but NOT the lives, of Ernie Gygax and Scott Felton. This is a terrible tragedy but could have been far worse.  We're all thankful that our friends were spared.

I was just there the day before with Ernie and Scott, along with Tom Wham and Andrew Carlson. I arrived in the evening around 7:30 pm and the usual discussion ensued about what game(s) should be played. Tom was just hanging out at that point after playing something all afternoon and some food was ordered in from The Next Door Pub. Andrew, Ernie, Scott, and I played Kingsburg which we all love and then Poo, the card game where monkeys fling their poo that Scott loves so much. I got an early lead in Kingsburg with the Damsel persona and a quickly built market making adviser-influencing very flexible, and the lead held up through the end. Ernie won our last game of the night, being the last one standing in the monkey cage and covered with the least amount of recycled bananas. I left there some time around 11:30 pm, helping Andrew load up the games he had brought, but joked that it was the first time I ever left before Tom, who had dozed off on the couch.

On my way home I silently chided myself for forgetting to take some pictures, something I often do (as everyone knows), but I was so caught up in the fun I never got around to pulling out the camera. It was such a great place to game and hangout with Ernie and so many others. It's the end of an era but hopefully Ernie, Scott, and KC (Ernie's dog who is also fine) will find new digs very soon. Let's everyone keep a good thought for all of them and, as efforts are organized, do what we can to help. Luke Gygax and Tim Kask have set up a Facebook Page titled "Ernie Gygax Fire Relief" which you can visit here to find ways to help.  Later this week, I will be coming up with a CMG-oriented way to help as well. 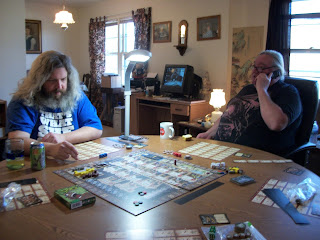 Here's a picture with Scott and Ernie

from a previous time we played Kingsburg.

Email ThisBlogThis!Share to TwitterShare to FacebookShare to Pinterest
Labels: Events