I had quite a bit of fun at the Nexus Game Fair this year and am glad I took the time off work to go.  A lot of folks ask if I ever get burnt out on gaming, since I work at a game store, so I am around games and sometimes teaching or playing while at work, and seemingly do a lot of gaming in my off time as well.  This usually is the question I get asked most when I mention I went to a game convention, then say, "No," when they ask if I went there in a work capacity.  I understand the question because I've seen it happen to other gamers I know but am glad to say that in three years of managing the store I have yet to feel like I need to walk away from gaming. 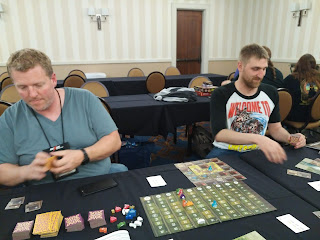 I mentioned in an earlier post how I kicked off Nexus with their Wednesday evening gaming, playing Between Two Cities (2015), The Builders: Middle Ages (2013), and Five-Minute Dungeon (2017).  Most of my gaming at Nexus was going to be boardgaming with just a bit of RPGing.  With conventions like Gary Con, I like to get in as much Old School wargaming as I can, along with some Old School RPGing.  With Nexus a few years ago, I was also able to do just that but there's not a lot of pre-gunpowder wargaming, which is what I prefer.  I'm a fan of Ancients and Medievals, but also enjoy Medieval Fantasy (Chainmail, HOTT, etc).  For my RPGing, I tend to sign on for 1E AD&D and (O)D&D, but will also jump in retroclone games like AS&SOH and a few others.  There wasn't much of either on the schedule at Nexus this year but there were a few 4X wargamey boardgames as well as some other I don't get to play in too often. 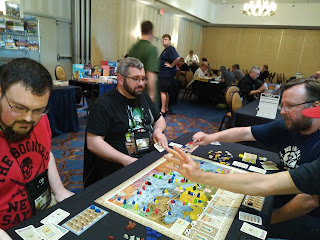 My Thursday began with a game of Concordia (2013).  I haven't played this much but find it very engaging.  I really love the artwork, the Roman theme is well-integrated, and the shifting markets that drive gameplay.  Scott Ward did a pretty good job explaining enough of the game to get us started fairly quickly.  The number of expansion maps available for this game have tempted me to become an owner of it though I am not sure how often I would get to play. 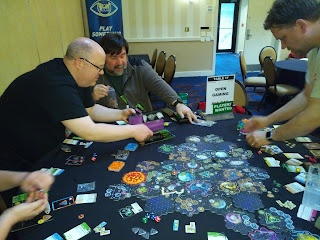 Later that afternoon, I played in a raucous game of Xia: Legends of a Drift System (2014).  Expansions were included this time and Charles Boyung was wise getting the game shifted to a large round table.  It was a fun bunch playing this game and one of the delights of Nexus for me this year. 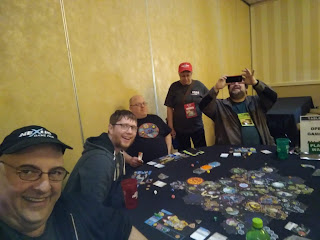 Nancy stopped by to see what all the laughing was about.  She is one of the busiest gamemasters of Nexus but still finds time to see what else is being played. 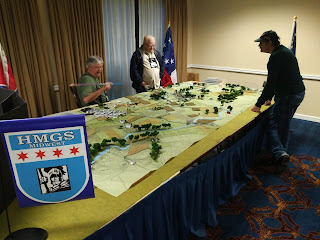 Although there was no miniatures wargaming built into my own Nexus schedule, I made sure to pop by and see what Steve Fratt had going.  His 6 mm figures fighting it out at The Battle of Antietam was a spectacular sight!

Although the only RPGing I had scheduled, when I was wandering the convention to check out the various game spaces I ran across my friend Wendy who told me there was an open seat in Harold Johnson's 1E AD&D game.  I don't tend to sign up for the Old School celebrity DM games since I've played with these guys before and I don't want to take a seat away from someone who hasn't had the opportunity yet.  With some of the conventions, these openings are at a premium but Nexus seems to be more about the boardgaming with a smattering a wargaming and newer RPG experiences. 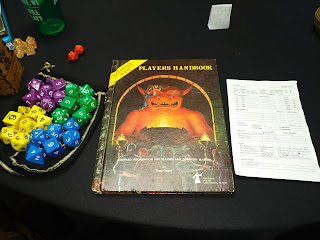 Just because I didn't sign up in advance for this 1E AD&D game doesn't mean I wasn't ready should the opportunity arise.  Plus, I did sign up for one of the hour-long Tower of Gaxx slots for Saturday.  I have since relegated that PC to NPC status in my own game and the players have run into him.  I LOVE recycling PCs from convention games into my own setting! 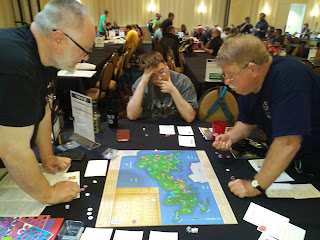 Friday began with George Henion's slot of Britannia (1986).  This was the original version from 1986, so it was about as wargamey as boardgames get at Nexus, though we weren't quite moving the chits from hex to hex.  George had procured this copy some time ago but hadn't gotten it to the table yet, so some of it was unpunched and we handled this as we went along.  We got about half the game played in the allotted time, and it was fun, but I had some other things to do and had to go.  I found out a bit later that several of the players stuck around for an hour or so more and managed to get through to almost the full game.  It was a real treat playing this classic. 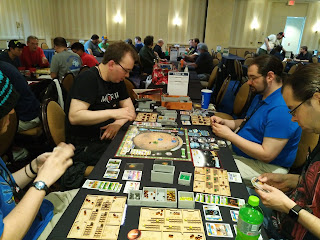 Terraforming Mars (2018) was the first of two games I would play with Mike Staub as the gamemaster at Nexus this year.  He had included the expansions and I have to say that sitting down the end of a long table and not being able to easily see what everyone was doing put me on the back foot for this game.  It had been a while since I last played and then only with the base game so I was more than a bit at sea when it came to following other people's turns.  My opening cards were also all much too high-cost to give me early options, so it took a few turns for me to get my own engine started.  Still, I found a strategy to keep me occupied and managed to enjoy building what I could. 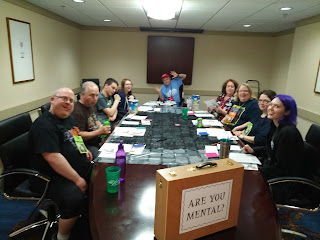 Sadly, the MtG booster draft I meant to play Friday evening didn't fire, which is a shame but I know how frustrating that can be for the organizers, so I sympathize.  There was other fun to be and, though, so I spent a little more time checking out what else was happening and ran across Nancy Hutchins running her session of Are You Mental (2017) in one of the RPG conference rooms.  The premise of the game is that all players have a character with some sort of superpower, though it might not be quite what the player expects it to be. 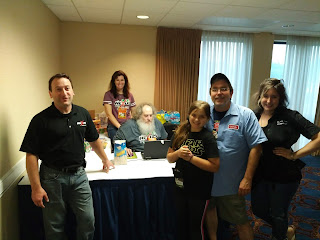 I also caught up with some of the Nexus core folk in the GM lounge.  It's a wonderful reminder that gaming, and Nexus Game Fair, is a family affair.  I picked up a fair amount of swag this year, perhaps overcompensating for only getting out one day each of the last two years.  The Jeff Easley dragon t-shirts for this year were especially nice and the Nexus messenger bag perfectly replaces a somewhat smaller messenger bag I recently planned to retire due to a faulty zipper and some unfortunate rips. 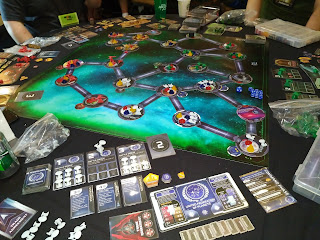 Saturday started with my second Mike Staub event, Star Trek: Ascendancy (2016).  I've been dying to try this one out for some time now and was glad to be able to get it on my Nexus schedule.  I love the way the universe gets built during gameplay, and I mean that both figuratively and literally.  It's just a very neat bit of design and it makes it feel like it's both expansive and far more vast than the huge areas being depicted during the game.  That's quite an accomplishment, in and of itself, but the rest of the game is elegantly crafted too.  I'm going to have to play this one again soon. 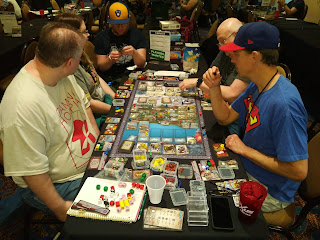 On Saturday afternoon, I found my way to Orleans (2014) which was being run by fellow Lake Geneva resident, Scott Halvorson.  I failed to grab a picture at our game but here's one of Scott later in the day running  I boxed myself out of one of the victory point multipliers early on but still enjoyed the game. 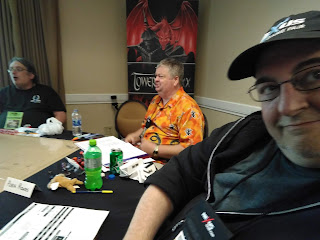 Finally, I got to play in a slot and a half of the Tower of Gaxx, and ongoing event that runs continuously but in one-hour sessions.  It was a very good time but with my schedule, I had to head back to Lake Geneva Saturday evening and some storms were rolling in.  All in all, it was a wonderful convention and I can't wait to go again next year!