I've tinkered with my own Medieval Fantasy Miniatures Wargaming System, Surcoat, for a couple of decades and have run it a handful of times per year since the turn of the century.  I have played this large scale and have even created small versions that travel well.  I've taken it to the first Gary Con, played at Gamedays, and have even run events at Gen Con at times over the last decade.  This year, I am busting it out in a big way and, as of this writing, there is one seat left of six for the Gary Con VIII Thursday slot on March 3rd, 10 am to 2 pm.  Rules will be taught and the game will be family friendly, so youngsters with a parent are welcome. 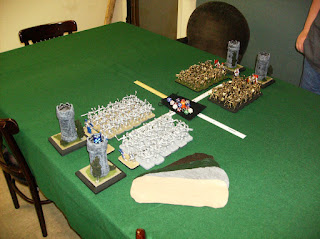 Two of the travel sets ready for play.

The description from the Gary Con VIII event listing is as follows:


Surcoat - Medieval Fantasy Miniatures Wargaming: A straightforward system that anyone can learn quickly and play. If you're new to miniatures wargaming, this one is for you. If you're experienced, you'll find ways to bring what you know to bear and perhaps win the day. We'll divide up teams of players based on experience to even the odds for everyone. Parents with youngsters welcome! Everything provided. 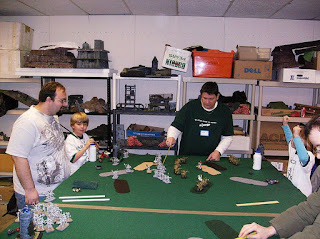 A larger skirmish at a Chicago Gameday.

I'll be setting up a scenario that is already in progress, in media res, at a tipping point where both armies are well balanced and the day could be won by either side.  There will be a castle and an outpost as objectives among other valuable terrain locations, high ground for the missile weapons and spell casters.  Let's roll some dice and have some fun wargaming! 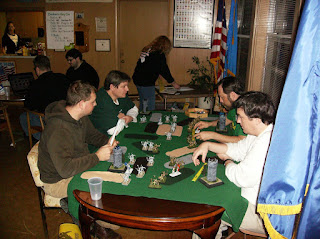 Surcoat being played at the first Gary Con.