A recent online discussion of memorable villains reminded me about Conan: The Adventurer [Animated Series] (1992-1993).  While I was never a huge animation buff growing up, I did love the films of Bakshi and a handful of cartoons in my youngest days.  I can also recall catching some of this version of Conan from time to time back in the early 90s, despite having just turned thirty by the time this first aired.  I certainly recall enjoying it for what it was and thinking some of the stories might be good fodder for D&D adventures.  While it only aired for two years, and the first season was but thirteen episodes, the second season was fifty-two episodes bringing the count to sixty-five half hour animations.  Naturally, Dungeons & Dragons had been around for nearly two decades by this time and one can imagine the influences that must have had one the show.  Conan has many other adventurers who join him on his wanderings in the series, most often in diverse groups.  While Conan is clearly the main character, often other characters are highlighted as bringing their skills to the table to help him win the day.

For younger readers, the early 1990s for all its bad haircuts and funky-fresh clothing was a time when putting a pile of skulls behind the hero didn't seem inappropriate for a kids show.  That's quite the pile back there and it must have been accomplished one enemy at a time!  Along the same lines and although it is barely started, some effort has been made to catalog the details of the animated series here on its own wiki.  There's merely a bit of villain work there, which is why I stumbled across it while surfing after the aforementioned discussion, but if you have an interest in furthering it, join in.  Wiki projects are only ever as good as the collective enthusiasm but, like a pile of your enemy's skulls, every little bit helps build them and it doesn't take long before the efforts start to show. 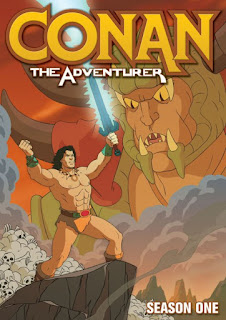 Finally, on the Hasbro Studios Shorts YouTube channel, they have a ton of one to four minute clips from the show, 143 from what I can tell based on a playlist I found.  A quick trip to Amazon shows that three DVDs, one with season one here, and season two part one here plus season two part two here, are all fairly inexpensive and available.  The three of them retail for about $60 but can be had collectively for about half off.  Even if you don't want them in your gamer DVD collection, enjoy the clips below where I linked to the playlist on YouTube! 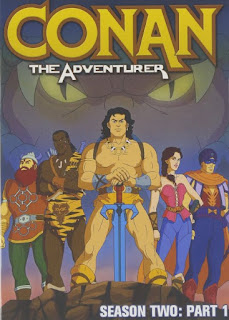