Knocked off a few boardgames in the last couple of weeks, though I have been less than diligent in my camera duties, let alone blogging about them.  The store hours at Lake Geneva Games have expanded, we've hired and are training two additional staffers (so far), and a new MtG set dropped.  Dare I say I have had a fairly full plate lately.  Nevertheless, after months of trying to arrange a game of Crusaders: Thy Will Be Done (2018) the LG lunchtime gamers managed to get it to the table.  I was thoroughly trounced due to a disjointed strategy that garnered a steady stream of victory points during play but left me wanting for end-game points. 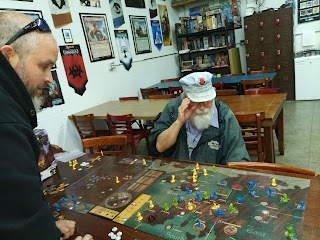 Fire & Axe: A Viking Saga (2004) has been around a while but was recently acquired and three of us put it to the test last week.  We played incorrectly but in such a way that we all, more or less, equally benefited from the error.  Essentially we were all taking additional actions each turn which, surprisingly, slowed down play rather than speeding it up.  We even removed the cards they suggest you set aside in games for beginners.

Wingspan (2019) is something Mark M. just got hold of, a slightly dented box copy which he lucked into getting, considering this game is seemingly hard to track down for less than double it's MSRP.  We had to truncate our game due to time considerations but got through about 80% of a full game and none of us had played before, so we all needed to learn it.  Rodney's How to Play video on it helped me out tremendously, as he always does.

I found all three of these games enjoyable and will play any of them again, if given the opportunity.  I think Crusaders can be played much faster than we did but we'll see.  Fire & Axe might need a closer look next time as I am not really sure how much playing it correctly will change the game.  I think the additional cards will make it a lot more competitive.  Wingspan works just fine as is but feels a bit like a race with little interaction between players, except when an action allows all players to benefit.  There's a bit of blocking other players when choosing dice but it didn't seem too egregious.  We'll see! 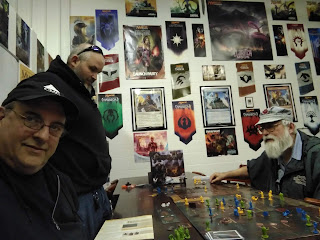