Mopping Up,Getting their Due, & Tracking Down in 1E AD&D Grymvald

The Lake Geneva 1E AD&D crew gathered a few weeks ago with but one missing member to unfreeze time after the big cultist temple battle from two weeks prior.  They still had the Witch of Dour Haven to locate and bring to justice.  Plus, there surely must be some treasure to be had.  And, of course, there must be experience to tally and some sweet, sweet leveling to be done.

The light of two huge braziers on the riser at the far end of the temple highlighted the carnage.  The bodies of almost a dozen heavily armed and armored cultists lay mangled on the floor along with two comatose party members.  There were two archways leading out of the temple, one to the north and one to the south.  They suspected the witch had cast a spell during the proceeding combat and that she had done so from the southern archway because now, a few feet down the hallway beyond the archway, a membrane of green slime blocked further progress. 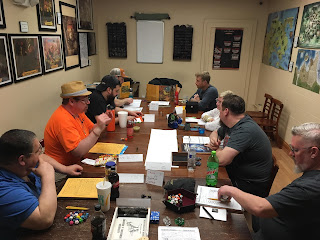 This was a more cautious foray into the complex at Marak Tor than many of the previous trips, but also one that was meant to be thorough.  They wanted to be able to say they had cleared the place and have it as a potential HQ for future expeditions deeper onto the Trackless Moors.  Once they had removed the slime-obstacle, they were able to ensure both the southern room and northern room were free from opponents.  This left the question of where the Witch of Dour Haven had fled.  The room was outfitted as a sleeping quarters for the witch, alone.  Some treasure was found as well as signs that others treasures had been here but were now gone.  A quick reconnoiter by the Half-Elves revealed a secret door to a supply room where food stocks and other provisions were stored for the witch and her closer bodyguards.  After some additional searching, yet another secret door was found to a lower chamber where a standing stone was kept, as well as a great deal of coinage).  It obviously had been brought here from elsewhere, as evidenced by the damage to it and the manner in which it had been propped up on an unlike pedestal.  The runes upon it were some form of ancient Dwarven language so they figured a way to transport it out of the structure (and eventually back to town in a double-locked box).  A later search of the same areas, mostly to retrieve coinage they were not able to carry on the first trip, revealed an additional hideyhole containing a wand of enemy detection.

After regaining civilization, the group spent some time converting their treasures into more directly useful items for the various party members, some healing potions were distributed, as well as cure scrolls and a few other spell scrolls.  Armor and weapons were acquired through trade or purchase to try and optimize everyone who might be in the line of fire.  A fair bit of time was spent seeking sage advice on the standing stone / obelisk, what it might be meant to represent or possibly do.  The group had sussed out that it might be used as a portal but were not clear on how.  A first attempt to discover its secrets from a wizardly mentor was only minorly helpful, though he did direct the group toward a more knowledgeable information source in the form of the Temple of Darien, the Guardian, a military-religious order in the kingdom's capital, Jalston, with which the party had previously had dealings.  In fact, Nydijan the (Human) cleric, one of the original party members (and still kicking) is of that order of Darien, though the temple in Jalston has a mostly Dwarven membership.  This, of course, worked out well for the adventurers because they were able to discover that the portal-stone was not usable without some sort of accompanying headwear, that it was connected to the Dragon's Teeth (a series of tors-cum-towers spanning the Trackless Moors), and the stone was probably what the witch used to escape.  All this being likely, arrangements were made to cover the stone in molten gold, encasing it in such a way that no one could come to it from elsewhere, or so it is surmised by the temple sages.  They also left it in the temple vaults for safe keeping. 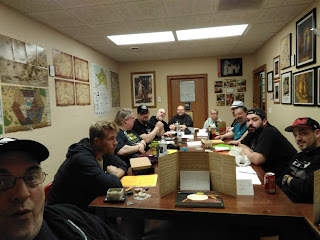 Mind you, the above took place over a couple of game sessions and yet a third has transpired since.  Although the witch had escaped, she was no longer considered an imminent threat and chasing her straight away in the unknown seemed like suicide.  The group opted, rather, with the help of a map and some information from a mining camp scout, to check out a ruins south of the Deadrop Goblin caves where that threat may have originally emanated.  This was also confirmed by their ally, the mist dragon that had been freed by the group from the Deaddrop Goblin caves.  The mist dragon, Vaporex, came up to them in a fog bank, making the party a bit nervous as to what might be approaching, but thanks to the newly found wand of enemy detection they group managed not to jeopardize their friendship by plugging the dragon full of arrows.  This newly discovered ruin, while not directly tied to the Dragon's Teeth, seemed like something the group should be better equipped to tackle without too great a risk to life and limb, something the group had begun to learn was worth consideration.  Early losses in the numbers of the group had been slowing down their overall progress and they felt a more incremental approach to adventuring might be prudent.  There were only a handful of founding group members (and a number of players had worked through several characters).  They understood that what they would find at this new ruin would be an underground goblins' lair and rats' nest, and so it has proved thus far.

The group scouted the hillock upon which mere remnants of a crumbled ruin sat, discovered a spiral staircase from it to below, but also found a cave entrance down the side of the hill.  Some goblins were dealt with outside of the complex, including several caught unawares while gambling by the top of the stairwell.  The cave entrance was determined to be primarily used by disease-ridden rats, so they torched and blocked it as best they could then made use of the spiral stair to descend within.  Inside they had several tense battles with goblins, mostly, but also a few hobgoblins, and a trained ferret in the keeping of the goblins.  Though they did not discover the location of the goblin spellcaster from the Deaddrop caves, they did find some treasure as well as a stairway leading even deeper underground and that's about where the group has left off.  With more to explore, they plan to hone their skills as a well-oiled machine to become a more competent strike force for these dangerous journeys in hopes of someday going on more legendary adventures!
Posted by Mark CMG Clover at 8:52 AM