Deep in the Grind in Grymvald

There was some concern from the players that they had been under-leveled to delve into Marak Tor and some even felt that the Deaddrop Goblin complex presented a low chance for survival.  I can't argue with that and every group, and player, can have their own opinion about the difficulty level of any adventure or campaign.  There have been a fair number of deaths.  And I'm not a kid gloves kind of game master anymore than I am an iron fist in velvet glove type.  I allow players to make choices and tell them the consequences.  I don't allow trial balloons (i.e. "IF I do [this], what will happen?") but I make sure to answer exploratory questions regarding details that can help inform choices.  There's no such thing as a true sandbox, as I've stated in the past, since there is no infinite sandbox, but I like to think that on the sliding scale between railroad and sandbox my own campaigns are pretty far over to the latter.  So, what's the point?

Well, after listening to my players concerns about what they seemingly believed to be a high rate of new character generation, shall we say, I decided to give them a location where they could simply throw themselves in for a few weeks or month and grind up some monsters into a fine EXP powder, along with the requisite coinage and magic items for treasure.  But please recall in my last campaign report I wrote, "This newly discovered ruin, while not directly tied to the Dragon's Teeth, seemed like something the group should be better equipped to tackle without too great a risk to life and limb, something the group had begun to learn was worth consideration.  Early losses in the numbers of the group had been slowing down their overall progress and they felt a more incremental approach to adventuring might be prudent.  There were only a handful of founding group members (and a number of players had worked through several characters).  They understood that what they would find at this new ruin would be an underground goblins' lair and rats' nest, and so it has proved thus far." 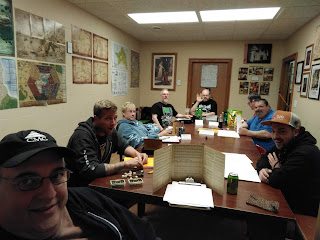 A bit shorthanded but not daunted!

So a couple of weeks of exploring this new ruin found them dealing mostly with goblins on the first level but also with a few other creatures, animalistic in nature.  There were a couple of hobgoblins but these were a cake walk.  They also had to deal with a small crypt section which, while it presented some serious difficulties, was eventually overcome through clever game play and force of arms.  Then they started feeling their oats and delved deeper, working their way around the second level, clearing out more goblins, hobgoblins, some fire beetles, and a bit more, only to eventually run up against one of the surliest, veteran goblins ever.  This fella was in no mood to charge in with a nasty goblin knife, opting instead to throw a flask of oil during a surprise round . . . then won initiative and tossed a couple more.  Needless to say, the group which had been doing so well grinding out encounters and had, indeed, found some success in leveling along the way, were burnt in half with six party members severely crispified, three to zero or below, one even so far under you'd have thought Thanos snapped him out of the game.  It was devastating.  But the party regrouped, cut off a continued assault by the goblin vet, gathered up their fallen, and retreated from the complex, then proceeded with great speed to the one place they thought they could get enough healing to make a difference.

In the kingdom's capitol, they hooked up with a temple they'd previously utilized and traded off a major magic item to secure a Raise Dead spell, to bring back the one party member who was beyond the pale.  They even had enough value from the item to bank two additional Raise Dead spells for future instances, should they be required.  The rest of the party needed some time in civilization to recover from dropping below zero but the healing of them was within the means of the party.  It was a tough set back but there were no permanent party member deaths, so it should be chalked up as a semi-success.  The group has reached a point where death is an obstacle but not insurmountable.  The grind has afforded them the option of pressing their luck without the risks being impossible to take. 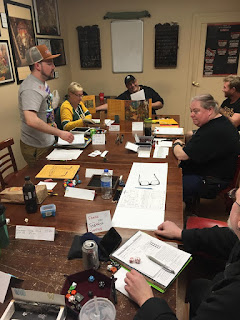 Their set backs seemed to fuel the group's resolve and they remounted an assault.  This time they approached by a less deadly route, opting to travel some distance through civilized lands and come at the complex from across a river, saving themselves from many wandering monster checks.  Always a plus.  They dove in, having previously mapped a good deal of the first and second levels, and utilized their wand of enemy detection to triangulate the whereabouts of potential threats then eradicate them with surgical precision.  While they were unable to locate the surly, fire-wielding goblin vet, nor the goblin shaman from the Deaddrop caves who had eluded them (and who they were sure had traveled to this location), they cleared out many goblins and hobgoblins, as well as other creatures quite successfully.  They also garnered a good sum of coins and gems, as well as some useful items.

Sadly for the group, you can only fight so many goblins before you experience what Portwert the Moneychanger calls a diminished rate of return.  At some point, the going is going to get tougher, and the rough-and-tumblers are either going to have to get going or get gone back to civilization to lay down their arms.  Adventuring is not a pretty business.  New challenges await the group as they are poised to explore the third level of the complex.  They are aware it is a more extensive crypt and that the undead are going to abound in great numbers.  They've seen what can happen to large parties of adventurers who get spread out and don't watch their six, nor their three, nor their nine.  They know they can't get the dead raised if no one is left to transport the bodies to the raisers.  While they might be less worried about a single death, or even two, they now have to be concerned about the risk of a Total Party Kill.  Not that I am rooting against them, of course, but sometimes the dice aren't in anyone's control.  And a sandbox is no sandbox if it doesn't let the dice fall where they may . . .
Posted by Mark CMG Clover at 8:16 AM