As a player, Gary Con Gaming Convention tends to be a place for me to jump into as many wargames as I can, since I get to RPG, and play boardgames and cardgames, for much of the rest of the year.  For GMing, I really like busting out the big game for Gary Con, so I turn to a couple of favorites in Divine Right (1979) and Civilization (1980), as well as the traditional Saturday evening 1E AD&D game (with some of the same crew since Gary Con II!).  Of course, start times on these submitted and approved events are not locked in just yet, but probability is high since they been run for many years in these slots, except for Civ which has an earlier start time than before.  Don't worry about Civ running through lunch as we'll all order table side service.  I'm looking forward to next March 26-29, 2020, as I do few other times of year! 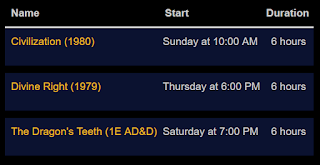