Oh, I so wish I could attend Huzzah! this weekend in Portland, Maine.  It officially runs from May 15-17th , 2015 at the DoubleTree 363 Maine Mall Rd, South Portland, Maine 04106.  You can sign up for the event on Facebook here and it appears you can still officially register for the convention here on Huzzahcon.com. 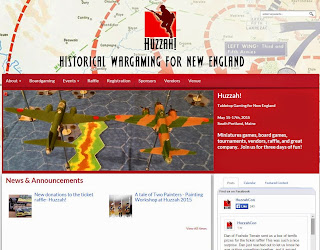 The convention description from their website is as follows:


Huzzah! is the annual historical wargaming convention organized by the Maine Historical Wargamers Association.  Started in 2010, Huzzah! brings together wargamers and wargaming clubs from throughout New England.  Approximately 200+ attendees visit the show, along with game masters, vendors, guests and casual passersby.  Huzzah! consists of over 70 events spread across the three days, including tournaments (Impetus, Flames of War, Bolt Action), how-to painting sessions, presentations by authors and guests, and lots of terrific games.  Our game masters, who hail from across the region, bring some of the most beautiful miniatures and terrain to the convention, and really well crafted scenarios.

Huzzah! 2015 will continue to see a significant expansion in board gaming at the convention as well.  Look for classics such as Advanced Civilization, as well as family friendly Euro-strategy games.

The Maine Historical Wargamers Association is a not-for-profit organization promoting history, toy soldiers, and the hobby of wargaming.  We run two to three game days each year (February, Summer, and October, generally) which are free and open to the public.  These game days are held at the Winter Street Center in Bath. 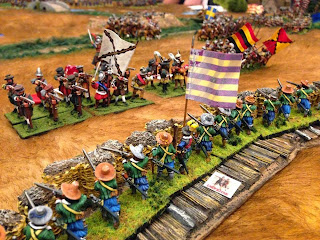 They are packed with events this year and all of the tables will have stuff going all convention long.  I gotta say, some of the pictures that Mike Paine has shared on Facebook about previous events up his way having me champing at the bit to drive up and wargame in Maine someday.  Check out a few of these photos