I was recently feeling a little nostalgic as I was wondering about what happened to the old nine-vignette castle/dungeon display that once graced the hallowed halls of the old Dungeon Hobby Shop in Lake Geneva, WI, back in the Seventies.  An article a couple of years ago on the WotC website showed a picture of the display and expressed not knowing what ever became it.  I started a thread on the Gary Con boards to see if anyone had any inkling of its whereabouts, or some more detailed pictures of it, so we will see if anything comes of that.  Here's the pic they showed on WotC -

(That's Mary Hendryx, of the Mary and Kevin Hendryx family,
former employees of TSR back in the day.)
My initial thought was, wouldn't this be great to have as a registration area display for Gary Con?  I think it really evokes the feeling of nostalgia and much of what Gary Con embodies, aside from being just damned cool.  The set up is nine vignettes or tableaus wherein an adventuring party is working their way from one room to the next, losing some party members along the way, and eventually fighting a demon (I recalled it as a dragon) in the final chamber.  It really got a kid like me imagining all sorts of gaming situations to see such a display.

Anyway, late Saturday afternoon I was walking over to the grocery store to get a bag of apples and some other supplies when some yoots (That's Pecci-eze for "youths") rode their bikes past on the cross street dragging a moving box, one of those roughly four foot high, three by three cardboard cartons.  As they did so, a couple of large pieces of styrofoam dropped out.  One of the three noticed and yelled to the others, but they shrugged it off and continued on their way.  I moved the pieces off to the side of the street so some unfortunate driver wouldn't run them over and also went on my way to the store.  Of course, I kept thinking to myself that I might be able to use them for some project, being a tabletop gamer, but carrying them to the store and back wasn't a practical plan.  While returning on my route I found they were still there and collected them.  One was just a flat piece but the other was obviously made to anchor some objects within the box, measuring about 34" by 28", with two two-inch lips on opposite sides and nine holes, the center three with an eight-inch diameter while the remainder having a six-inch diameter. 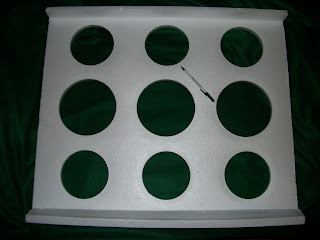 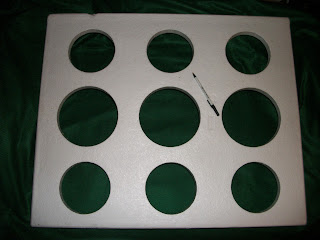 Perhaps some of you can see where this is going?  My thoughts are to create a somewhat scaled-down display inspired by that old TSR store diorama with windows into each location.  It might be more ambitious than I have time to handle in the short term but this could certainly be a longer-range project worth my efforts.  We will see.
Posted by Mark CMG Clover at 7:30 AM

It sounds like a heck of a project. I hope to someday see photos of a finished project. :)