I've been catching up lately on a few shows I had meant to watch when they were first on including Beowulf: Return to the Shieldlands.  It's a twelve-episode first season of a re-imagining of the epic poem.  One of the female leads in the show who plays the Rheda, Hrothgar's wife in the epic, is played by Joanne Whalley who some might remember as Sorsha from the classic fantasy film, Willow (1988).  As I mention elsewhere, "She has a much deserved lead and acquits herself well. Since first seeing her as Sorsha in Willow and enjoying her in The Borgias and Wolf Hall, she makes the most of her role in this. Something else I am liking about this show is the many gray areas. They make Beowulf a clear-cut Hero, and purposefully make him sort of flat in that regard, and make the creatures (trolls, barghests, etc) very straightforward antagonists. But the dimensions of all of the rest of the major players from Walley on down are manifold, neither villains nor heroes. Lots of character depth and many characters to juggle, leading to some cool mysteries and twists. There's an early murder which was resolved in a way I did not see coming, and not for lack of clues. This show is much better than the critics let on." 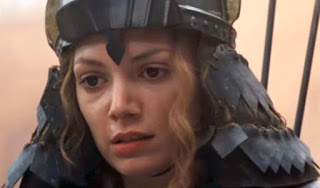 Regarding Beowulf, "I first read the 1963 Burton Raffel translation when I was a youngster, as it was readily available in paperback. That introduced me to the text and the story. I have since read a number of modern translation and haven't read anything older than Raffel's attempt. The 1991 alliterative verse translation by Frederick Rebsamen cleaves as close to a faithful Modern English translation as I have read and uses mirrored pages for the passages in Old English, which can be helpful for those wanted to learn the older language and understand the translation process more closely. The 1999 Seamus Heaney version is a fun read but it should be said that he strives for a poetic outcome over an accurate translation and is often criticized for that. I still enjoyed it. There's a 2005 B&N published translation that I have heard is good, academically, but I haven't seen it yet. It would have been too late to make this list here." 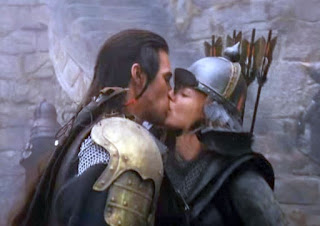 Finally,  now I've been inspired to grab that Tolkien translation from a few years ago, since HPB just sent me a 40% Off online coupon and they had the hardcover new for $20 to start (with $4 shipping). Here's the listing on Amazon for comparison.  But let's take a last look back at Sorsha deciding she wants something and going for it in a clip from Willow . . . sadly, that doesn't work out so well for one of the guards who gets toasted.