Took a few pics at Gary Con XI.  The first small batch were some early arrivals and gaming pre-con.  Picked up my badge on Wednesday and caught up with some folks for a bit of Liar's Dice. 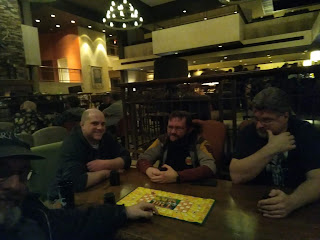 Thursday was fairly full with Vikingar in the morning, The Dark Eye in the afternoon, then on to our annual Divine Right game in the evening.  I was also lucky enough Thursday evening to run into some friends and get to try out Larry Hamilton's burgeoning card game. 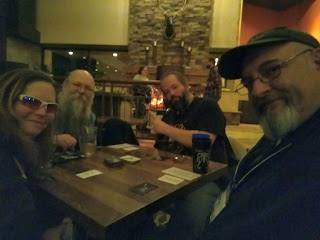 I kept myself mostly open on Friday to catch up with friends and prep for the Tourney of Legends, which I had been asked to help DM in the eleventh hour due to a cancellation.  Saturday got a bit convoluted during the daytime with some "off-campus" obligations but I loosely consulted during the big Middle Earth Chainmail game on the side of Sauron the Fair against the Numenoreans, then it was time to run my traditional 1E AD&D game Saturday evening.  Sunday was mainly about Avalon Hill's Civilization returning to the schedule. 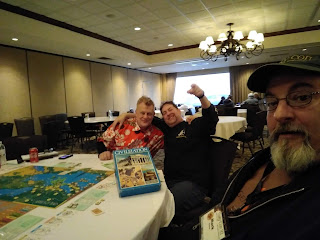 I wish I could have done more but I had a great time playing and running games.  As usual, there are a lot of pics from the dealer's area and the wargaming tables.  I'll write more up about specific games and such in the future but this posting is simply and overview and to say that full albums can be found on Facebook here and Google here.
Posted by Mark CMG Clover at 9:09 AM