Gotta Get Some Goblins

My 1E AD&D Grymvald group was down to five last session due to a couple of vacations and a last minute work situation.  Even at full strength, they had been having some difficulty at Marak Tor (lost three PCs last time).  So, the group opted to look for a somewhat less deadly endeavor.  Fortunately, a map secreted in the hidden compartment of a previously discovered scroll case showed the location of a cave complex which they determined was further to the east of Marak Tor by about another day's travel.  This information was gleaned from Slanch who even knew there to be goblins in that area.  After some discussion, the group decided to guide Count Ulrich, Penelophe, and Slanch back to the mining camp, to resupply while there, then strike out again for adventure, this time to the newly discovered complex. 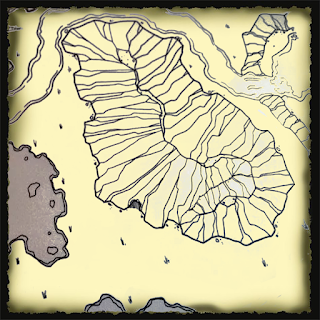 The adventurers made sure to travel by day, utilizing the bunker at Marak Tor as a secure way station halfway to the cave complex.  After an uneventful night in the bunker, they continued across the moors toward where they suspected the location to be.  It took some wandering but once in the area they were able to locate this new tor by following a stream which grew wider as they got within sight of it.  Staying a mile off, they set a cold camp and watches, hunkering down for the night.  They did some minimal scouting but waited until the next day to make a careful approach, sticking to the scrub and copses of trees to get close enough to spy the cave entrance.  Sure enough, there were goblins seemingly guarding the entryway.  The ranger and half-elf made some effort in searching along the western face of the tor, keeping out of sight of the cave mouth, for any hidden entrances but found nothing.  They regrouped further back and decided to circumnavigate the tor to look for additional points of entry.  Suspicious of possible patrols, they kept well away, perhaps a quarter mile, and surprised a lone goblin to the south of the complex, taking him unaware and quickly securing him to make sure no alarm was raised. 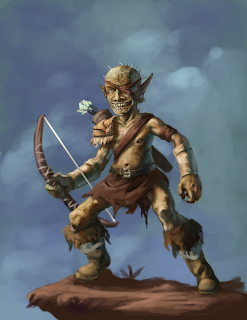 The goblin seemed to have little information but, when threatened, revealed there were a couple dozen or more goblins in the complex and that it definitely did not have an entrance on the far side, near the waterfall.  Definitely not.  Although they suspected a trap, the southern entrance afforded no way to get close unseen, so they backed further away, traveled back west, crossed the river at a ford they had previously discovered, then made there way around to the east side of the tor.  Creeping closer along the river toward the waterfall, they sighted about half a dozen goblins outside another cave mouth near the falls.  Being late in the day, and with the tor at their backs casting shade, the goblins were outside the cave.  A couple of plans were discussed but waiting until morning meant the waterfall cave entrance would be bathed in morning sunlight and the adventurers would be unlikely to find the goblins out of doors, so they rushed the entrance and slew them in short order, preventing one of their number from retreating to let his clan know an attack was in progress.  Although they kept their captive on a lead, he had also tried to warn his clanmates of the attack so they dispatched him, rather than risk further treachery.  His cries outside were drowned out by the crashing water but if they had taken him inside with them, it might have proved their undoing.

They entered the complex to find a long cavern stretching inward with a fire pit and bramble nests on which the off-duty guards must sleep during the day.  They had caught them during the dusk change-of-shift, so no others were slumbering here.  The cavern had a dogleg turn at the far end which ended in a door, the size and construction of which suggested the complex was originally of Dwarven design.  Fortunately, and a key found on one of the goblins allowed them to open the door but another small skirmish quickly ensued.  They took out three more goblins just beyond the door, and another working in a crude armory nearby, before running into some more serious resistance.  Rounding a turn in a wide hallway, they proceeded along and discovered what might have been stone coffins in a pair of alcoves.  Suddenly, two large ballista bolts shot out of the darkness at the far end but missed the party members, shattering a weapons rack behind them.  The group charged forward as their lantern light revealed two ballista with goblin crews and a hobgoblin barking orders to them.  As they got closer, the half elf had been carrying a bucket partially filled with water to use in sussing out traps but now flung it over the group to try and disrupt the ballista fire.  This proved serendipitous since, although it fell short, it uncovered a pit between the party and their assailants.  Feeling they'd be sitting ducks on the near side of the pit if they stayed out in the open, most of the group immediately made use of the cover provided by the nearest alcove.  However, the fleet-footed half-elf decided instead to leap across the pit and try and take out the enemy rather then become pinned down in an alcove and risk reinforcements surrounding them.  The half-elf, with Sophie the guard dog following closely, sprang across the pit only to come up short and drop twenty feet below, falling unconscious and slowly bleeding out. 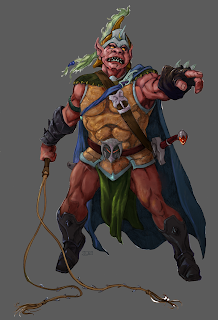 Sophie, the guard dog, however, made the jump successfully and began tearing into the ranks of the goblins, taking out one of the crew members, while another fell to an arrow from the adventurers.  A series of good and bad fortune followed in which Sophie managed to live through the decidedly quick battle, taking out quite a few of the enemy, the rest succumbing to missile fire.  Sadly, between damage from ballista bolts and additional failed attempts to leap across the pit, during rescue efforts on the half-elf, more party members went down.  They managed to bring the fallen around but used up all of their healing spells and potions in the process.  They then had to retreat from the complex, though not before dropping the ballista into the pit, rendering them harmless should the party return this way again.  It could have been a lot worse but needing to retreat might mean the goblins are better prepared if or when the adventurers return.
Posted by Mark CMG Clover at 11:05 AM