Ever have a group stop just short of a goal?  My 1E AD&D in Grymvald game was like that and I did something I rarely do, for the sake of the game.  It really wasn't too much of a DMing faux pas, and I've got plenty enough reason to have made it happen for the good of us all, and that includes anyone following along with this narrative from outside the game.  Let me make my case.

I spent the end of last year planning to run a 1E campaign in 2019, talked it up, and advertised the fact locally and around the social media channels.  I Shared it on Facebook in multiple 1E and Old School groups and finally had the interest of nearly a dozen potential players, totally intending to run a large group, and figuring if a few don't make it any given week due to scheduling conflicts, we're still good to go and will be playing most weeks.  Perhaps due to some conflict of my own, we'd miss a week once every month or two.  I like it when a campaign keeps a certain pace.  I like running games that get into those juicy mid-levels (5 to 9, I feel) fairly quickly.  For me, this is the sweet spot for 1E AD&D gameplay. 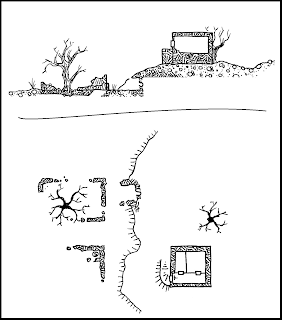 Mind you, I'm primarily a sandbox kind of DM.  There's a spectrum between railroad and sandbox, IMO, a sort of sliding scale, on which all games fall with no game being at either extreme and every game having at least some of both aspects.  The dice ensure some randomness and the fact that we know we're playing a game guarantees it's at least somewhat of a contrivance.  My point being, at my table there's going to be more randomness than predetermined narrative.  What the players decide to do dictates what happens.  The DM has no story, in my games, and the narrative is a retrospectively derived from gameplay.  There are story elements all over the setting but the players' actions guide how they come into play.  As a DM, I'm part of an audience of one who doesn't know everything that will happen but has a fairly good grasp of the potential story about to unfold due to dramatic irony.

Imagine my frustration, then as a DM and fan of the gamers at my table, when we start the campaign early in January, generating two characters each (one as a backup), only to follow that up with four weeks of having to cancel due to weather!  Can't be helped but already 2019 seems to have it in for us.  Of the dozen interested players, two didn't follow up and two more had scheduling issues crop up before we even got started, so we began the campaign with eight players who had characters but didn't get to play them in earnest until a month later.  When we did get going, I was surprised when the group ignored lesser ways to garner early experience in favor of diving into the most dangerous mission they could find.  Really, I hadn't expected such an ambitious crew but, "More power to em," I thought.  If they really gel as a group right away, I'm all for it.

Turns out, if you put a half dozen or more people in a room who all have vast individual experience but scant relationship with one another, there's going to be some time required for the group to become cohesive.  Convention and gameday one-shot sessions aside, campaign game groups do generally fire on all cylinders from the start.   What followed was five or six weeks of players working out the kinks in their collective playing style while their characters were punching above their weight in a meat grinder relative to the level of the party.  The warning signs were there for them, and on multiple occasions they commented they might be in over their heads, but it didn't stop them from trying, and losing quite a few party members along the way.  There were victories, to be sure, but the low survival rate meant the players were gaining setting knowledge and institutional memory without the individual characters advancing substantially. 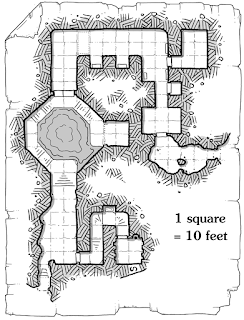 Eventually, the group took a step back and determined they needed to tackle some more manageable missions before remounting an expedition into the initial site of their early adventures.  They discovered a lesser location and, with the group down a couple of players due to scheduled vacations, scouted and assaulted this alternate location quite successfully, to a point.  It was great for me, again, as a fan and audience member, to see them work together more effectively.  Unfortunately, even as they were overcoming diversity and obstacles, they were also missing out on the rewards nearby.  They pushed themselves in such a way that they had done most of the hard work and would likely need to retreat right before crossing the finish line in the latest race they had chosen to run.  This is where some intervention on my part sort of broke one of my own rules regarding letting the chips fall where they may.  If they cleared most of the adversaries from a complex but left the treasures undiscovered nearby, in a 1E AD&D game that means garnering only a fraction of the experience points they had worked so hard to earn.  I dropped some encouragement into the mix at this point to be sure they'd reap the benefits and then also discouraged pushing things so far that they'd squander those gains.

Now, some might think this a betrayal of the very DMing style I profess, the one I've cultivated for four and a half decades, while others might feel it is more important to put the success of the gaming group ahead of the purity of a sandbox game.  I, as usual, fall somewhere in the middle.  It's like the age old DMing question, "Is a secret door truly secret if a DM is going to ensure it is discovered?"  There's probably no right answer or, at least, no universally correct truth to any answer one might give.  In most campaigns I have run over the years, if the clues are there and the players miss them, so be it.  Many treasures have been left in the hidden compartments of chests and under the floorboards and flagstones because the dice were not kind on a given day.  Ultimately, though, all I did was help define the options and let the players decide what they should do, perhaps with a bit of emphasis on the downsides of not choosing one over another.  I might have nudged this game, if not the campaign, a little further away from a true sandbox but I think it was the right call.  Only time will tell and I look forward to finding out.