Prophecy (2002) is designed by Vlaada Chvátil.  Originally published by Altar Games, the version I have is published by Z-Man Games which I understand includes some upgrades and corrections.  We watched a how to play video from Scott Nicholson so we could hit the ground running since none of my group of four had previously played.  Most of us have played similar games, so it wasn't too tough to pick up though there were a few sticking points we needed to clarify, like what is meant by "least" and what is meant by "fewer."  I know semantically there is a difference but wasn't sure how that distinction translated to the game nor if ties mattered in one or both cases.  Turns out it does matter in the former case but not in the later.  There were a few other odd cases that needed rules reference but mainly just getting to know the various in-game items and abilities ate a lot of time.  We gained speed with each round of turns.  We also established early on that the game would take us longer than the time we had allotted for play, so we sped things up after a couple of rounds of turns by making sure each player got a regular item and an ability from one of their two starting guilds.  We individually drafted one of each from three cards in each case.  That helped us get moving more than anything.  Once we weren't stuck in the mud, we all enjoyed the game a lot more. 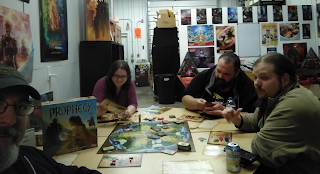 "How about a Fresca?" - Judge Smails

I got a good deal on this game through eBay and the seller through in some minis to be used in place of the character standees, so I'd be pleased enough to get just a few playthroughs.  But I think with some adjustments like the drafting mechanic for one regular item and one trained ability, gameplay is vastly improved by eliminating the first, slow third of the game.  Maybe that third of the game would prove interesting for folks unused to such games but it's a lot of hoop jumping for experienced players to overcome for little reward.  Once on the far side of that first third, the game picks up tremendously.  I've also got the first of two expansions and look forward to adding it in for a subsequent game, though maybe not the next time since there is still more to be gleaned from the base game, I think.  There's a third expansion which appears to change the game quite a bit more than the first though I may pick it up just to own the complete set.  We'll see.
Posted by Mark CMG Clover at 11:30 AM