Carl Black​ apparently found this surly miniature somewhere and immediately thought of Tom Tullis​, so Carl bought it and brought it to Gary Con XI as a gift for the founder of Fat Dragon Games​.  I was pressed into running this 1E AD&D game on fairly short notice and snagged some Dyson Logos​ maps to utilize, including one he was kind enough to name my honor some time ago.  When this miniature was gifted to Tom at the game table, I couldn't help but work it into the adventure. 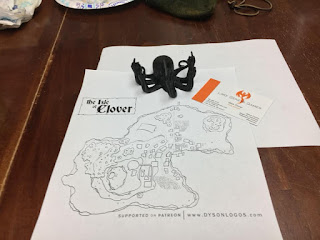 Essentially, the group, most of whom have a connection to a local brewery and restaurant on the shores of Gentle Lake, are asked to convey a barge of ale across to the Isle of Clover for an impending festival.  They manage to fight off a rather nasty water elemental which attacked the barge, possibly due to someone defiling the lake with some of the, admittedly, inferior ale.  As they finish the crossing, they are also informed that as part of the festival, there will be a lottery to choose who will have the honor of being the first to explore a newly discovered underground complex beneath the island.  The players jumped though a lot of hoops to enter their name as a group and attempt to influence the outcome of the lottery in their favor.  Just their luck, they win (since no one else had entered any names) and, after consuming copious amounts of free ale at the festival, are lodged in a luxurious pavilion. 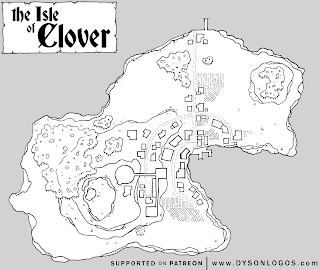 Thanks to Dyson Logos, I had a ready-made and personalized adventure location!
Cartography by Dyson Logos is licensed
under a Creative Commons Attribution 4.0 International License.

They do set watches and during the night some distant drums draw the attention of the fighter on first watch just before he is meant to rouse watchman number two.  He pokes his head out of the pavilion and is saved by his helmet as a sock full of slugs is used to try and kidnap him by a handful of cultists.  Several cultists are killed though two manage to flee.  Most of the group dons gear and pursues and find that despite the weakness of the individual cultists, their fortifications are dangerously formidable.  The defenses claimed several of the adventurers.

Once they finally gain access to the cultists' lair, and the remaining adventurers are all reunited, they dispatched a number of other cultists before finally locating the secret, inner sanctum.  Unfortunately, while attempting to thwart the sacrifice, some spilled blood triggers the very ritual they wished to prevent and a tentacled horror rises from the depths of a pit, flailing about.  During the ensuing battle, the horror laid low all but one of the adventurers before it was vanquished!  With their leaders and false god destroyed, the surviving islanders were quick to offer whatever they could in recompense to the hero(s) who saved the Isle of Clover.
Posted by Mark CMG Clover at 4:51 PM