We took a session off last week due to Gary Con XI occupying so much of everyone's schedule but we got back to our 1E AD&D game in the "secret" room at Lake Geneva Games almost at full strength.  One of our numbers could not attend but another player who is temporarily in town joined in the fun.  Our temp player is Alex's nephew, Mike, who is here after Gary Con for just a short bit.  It was easy enough to have him use Alex's backup character.  As folks might recall, the players all created two characters right away with one being a backup, to be brought in right away (as soon as reasonable) in the event they suffer a dramatic loss of hit points with their current bundle of stats.  Mike became Kuma the Cleric for the evening, an acolyte who wouldn't stand for being a background player for long!  After spending a bit of time rehashing the events of two weeks prior, when two players were absent, and doling out the Experience Points, treasure was divided and some spent at the mining camp, which has a general supply store.  There was also some healing to be done due to wounds from their previous foray into the underground complex below the ruins of Marak Tor on the northern edge of the Trackless Moors. 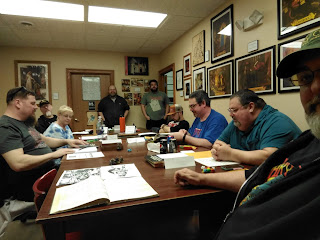 When their transactions were complete, a meeting with the supervisor of the mining camp confirmed that our fearless adventurers were on the cutting edge of civilized ruins exploration.  He had no new information for them and when the group explained they suspected cultists were taking root in Marak Tor, it came as a surprise to the supervisor.  The party wondered if he was being fully forthcoming, so they left the mining camp with pretensions of heading back to the town of Holdmarch but left the path surreptitiously and traveled back to Marak Tor, refreshed and resupplied.

The group knew there were three people held up in the bunker above the complex, the lone building standing intact on the tor, so they attempted to make contact and swiftly did.  They had only seen the trio while the group was battling goblins three days prior, and hadn't made direct contact, so discovering Count Ulrich, a down-on-his-luck noble, his man-servant, Slanch, and Penelophe, a mysterious, tight-lipped cohort, cleared up a minor mystery.  Sir Virgil, the party Paladin of Darrien the Defender, picked up no evil from the three bunker dwellers so the trio were invited to join in the next expedition below.  Although he laid no current claim to the ruins or complex, Count Ulrich explained that his ancestor, two hundred years ago, had built this place as a means to explore further south onto the Trackless Moors where a series of towers known as the Dragon's Teeth were know to exist.  After Ulrich tithed the two clerics and the paladin, they formed up with the count and Penelophe in the center of the group, leaving Slanch behind to keep watch on the bunker.  Now ten strong, the group prepared to descend. 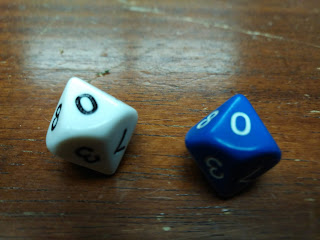 During a break, Alex was kind enough to pass on a pair of ten-sided dice to me that his father had left to him.  He told me that, given his father had many, many dice, they weren't unique or particularly special but I begged to differ and thanked him.  These dice would claim the life of a character before the night was over.  Perhaps it was bravery or maybe hubris that guided the plans of the group when they opened the secret door they had only suspected existed which gave them a second entryway to the underground complex.  They had previously come toward it from beneath but rethought their route when a ponderously slow-moving and malformed humanoid statue ground its way across the foyer when last they explored.  Now, knowing the secret door's mechanism, they opened it and planned to delve right in directly toward their next objective, a third-level deep room completely enveloped in green slime . . . but not before surrounding the eight-foot tall stone monster with massive fists that moves so slow it would have been fairly easy to avoid.

About half of the ten party members went more-or-less straight below but several members of the group engaged the juggernaut with weapons while one awaited a chance to join the action and Sonoma, the dwarf fighter, attempted to tie the one ton animated statue's legs together with some silk rope.  Sadly, this is where my newly acquired dice finished off Segovax the Fighter with two hard hits in succession from the guardian statue.  Perhaps it was the lack of effectiveness of their weapons, or maybe the fighter's blood and brains strewn over their boots and greaves, but it was around this time they disengaged from the entry guardian and got on with their mission.  It was a tough loss but Cerverious (sp?) the Fighter was nearby and joined the group as a replacement.

Once on the second level of the complex below, they established that some others had indeed been there in the interim since a tapestry had been re-hung.  The group checked around in known locations but found no other signs of cultists (or otherwise), though a previously missed feature, pillars that didn't extend to a ceiling, warranted attention and turned up a key.  Back on mission, they took the long way around to re-open the secret door, and necessary step in venting the smoke and heat if the group was going to burn out the slime infestation in the first room of the third level below and gain access to more of the complex.  They used enough oil to burn a little more than a third of the green slime and reveal a doorway as well as clear a path to it.  The key, as it happens, looked like it would fit the lock on the door but without a party thief, a debate ensued regarding the best approach. 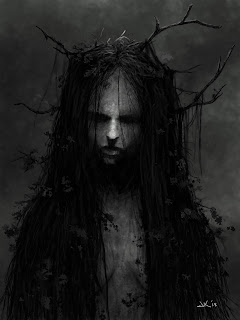 It was Kuma the Cleric who, perhaps out of frustration with his over-cautious (?) companions, took the key and moved forward to unlock the door.  He managed the task but not without tripping a poison needle trap which his body was unable to withstand.  First his fingers went numb, then his hand and arm, his shoulder next, followed by his whole side, causing him to collapse on the newly-cleared floor.  As the remainder of the cleric seized up, someone checked for life and found he had only been paralyzed.  Rather than remove him from the complex, the group (who was strung out across a narrow passage through the slime and up a narrow spiral staircase) decided it would be best to check the now unlocked door.  It revealed a short hallway beyond that opened into a larger chamber.  Despite the lingering odor of burnt slime, some in the group could smell burning incense and those toward the front could see flickering candle light.  Finley, the ranger in the front, and Nydijan, the cleric in the rear, donned a pair of cultist robes they had picked up on a previous exploration and a rope was shared out over the length of the single-file party to simulate that the party were captives.  The ranger stepped through the door and triggered a covered-pit trap.

It was fortunate the rope had been shared as it prevented the ranger from falling the full twenty feet to the spikes in the bottom of the pit.  As it was, he managed to slam into the wall of the pit about halfway down, dangling from the rope secured above by Sir Virgil the paladin.  At this time, a pair of cultists stepped into view across the far side of the pit trap, shielding an unkempt woman who was casting a spell.  The paladin's armor began to feel quite warm.  Although a couple of party members attempted to fire missiles, the cultists were hit for but little damage.  Despite his armor and metal accouterments burning his flesh, the paladin held fast on the rope and tried to help the ranger climb out of the pit.  Sadly, their first attempt almost resulted in the ranger losing his grip and falling further.  With the armor continuing to burn the paladin, the green slime then began to recover the entirety of the room.  It was then that Count Ulrich and Penelophe decided enough was enough and worked their way through the party to the rear, doing their best to escape.  After an attempt to prevent their exit, some quick shifting around allowed them egress.

The paladin now managed to pull the ranger from the pit and the last few party members rushed for the narrow, spiral staircase.  But Thonon, the magic-user, remembered Kuma the Cleric was not truly dead and could not leave him to be overtaken by the progressing green slime.  Thonon dodged around Cerverious (sp?) the fighter and sidestepped Finley the Ranger but ran full-on into Sir Virgil, the paladin, who was off-balance as he both tried to leave the green slime encroachment even as he was attempting to remove the last of his burning armor.  The two fell to the floor, the paladin finished off as his flesh was deeply seared and green slime dropped upon both him and Thonon.  It was all the magic user could do to escape the slime.  He and Borbeoy, the druid, watched helplessly, the green slime enveloped Sir Virgil and the paralyzed Kuma, swiftly eating away their flesh.  With no alternatives, the party retreated upward, having lost three party members but gaining some solid intelligence on the nature of the Witch of Dour Haven.