Something from Nothing: 1E AD&D in my Grymvald Setting

Folks will recall I planned to start up a 1E AD&D campaign in 2019 and I did just that.  It's been slow going putting together the group then getting up and running mostly because the weather has been uncooperative but we're on track now.  I set a target number for players at ten or more but wound up with eight after two of the ten dropped early on due to changing commitments.  I've been running games for a long time but usually kept the number to around five or six.  I've never been one who enjoys running a game if only one or two players are involved, and even three players can feel a little light, though doable.  Five to six feels comfortable for me even if one or two people cannot make it on a given week.  It's also been true that for most of my life the game spaces available to me would have made larger groups problematic.  I have run the occasional one-shot game for gamedays or conventions with a higher number than six, even as many as a dozen or more, but a large-group campaign had never been a goal not a result.  With our first campaign meeting set for the 2019 1E AD&D campaign in my Grymvald setting, we had a solid eight players, and a comfortable place to play in the secret game room of Lake Geneva Games. 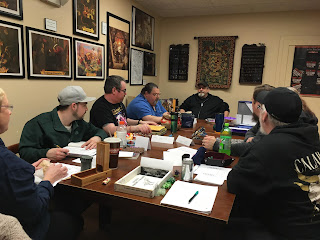 Thanks to "Scott Michael" for the picture!

In January, the remaining nine of us gathered and created characters.  I asked everyone to make two characters initially.  This is a First Edition campaign and that can get deadly rather swiftly, depending on the choices of the players, but I don't want anyone sitting around just watching everyone else play if their character dies. Even if it feels like I am using a giant shoehorn to do it, I want a player to have a back up character ready and for me to be able to bring them into play as quickly as I can come up with a contrivance to do so.  Our first meeting was mostly about character creation but included some casual RPGing to set the stage.  While this first session saw the players doing little more than establishing their places in the town of Holdmarch, they also gained knowledge of the mining operation on the Trackless Moors south of the village.  A couple of the players had a connection to to the mining camp.  We had utilized the secondary skill table from the DMG during character creation and one player had a mining background with another being a teamster, so that lent itself nicely to that bond.  In fact, two were leatherworkers and two were fishers, so I decided to have pairs of players start the campaign by knowing one another.  The gardener and the carpenter was a bit of a stretch but since they were the remaining two, I made it work.

With that groundwork laid, the campaign was set to begin on the following week but a subsequent four weeks of freakish storms, which seemed to mostly target our game night, made gathering to play an impossibility.  From week to week our group watched the impending forecasts hoping they'd be in error but finding when the day came each week for us to play, cancelling was the only prudent choice.  While I live nearby, as do one or two others, the majority of the players have a fair distance to drive for our game and even in the best conditions it's tricky, work schedules being what they are.  The first week that we cancelled, I didn't think much of it.  I like establishing a game as weekly knowing that from time to time we'd need to cancel due to weather or some other scheduling conflict.  If a weekly campaign meets three or even two times in a month, I consider it normal.  It became quite strange, though, to find that four weeks in a row we were forced to consider cancelling, and each of those four weeks I felt it best that we do.  However, two weeks ago we returned to the table for our second campaign meeting and managed to have a third get together earlier this week.  We are taking this coming week off for Gary Con but we're all going to the convention so none of us will miss out on gaming during the campaign break.  We plan to gather again the following week.

The second week of play saw our first character death.  The group had followed up on some information from the mining camp about some ruins discovered on the Trackless Moors.  I won't go into too much detail because I plan to have this available for me to run at Gary Con but let's just say there was no returning for the fallen thief.  These are veteran players but as with all new groups it can take a while to find their groove.  This lack of cohesion can manifest in chaos and disorder.  This can in turn lead to splitting the party which is tricky enough when it results in two smaller groups but we had player characters in three separate locations with some impediments between each.  A warning sign was ignored, a dangerous foe attracted, and an overwhelming force resulted in a quick death and the subsequent destruction of the player character's body as well as much of their equipment.  I mention the latter because it may have played a role in the concerns of the surviving characters.  While they moved quickly to discover what had happened, and did overcome the foe with quick action, some of the table talk set a tone prioritizing life and wealth, among other things, in a fairly mercenary hierarchy.  We'll see how that plays out but it might be good for the players to insulate themselves from character death if it means they will take more chances and have more fun. 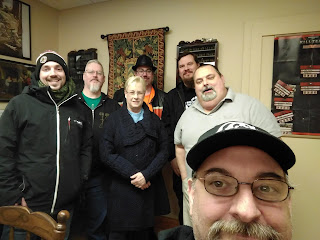 They seem happy and this was taken at the end of the evening!

Two of the players couldn't make it out for our third campaign meeting but we pressed on and I fudged one thing to avoid a potential Total Party Kill.  It wasn't retroactive, so I wasn't turning back the clock, and it probably changed how things played out though not so much the result.  This was definitely a DMing decision made on the fly but under the circumstance it was the right call.  Really, it came down to design versus play.  I had designed this adventure location with certain norms in mind that weren't in evidence when we got together to play.  I think we make assumptions all the time while prepping for games but in this case I had left only a crude back up plan, an encounter with one primary solution and nothing but brute force as an alternative.  It's true that there are times when brute force should be the final option for adventurers but I hadn't envisioned it in this case and I was surprised by it when I shouldn't have been.  Even an old dog, I suppose . . .

Despite the vagueness of this summary, I think that brings folks up to speed on the campaign.  Post-Gary Con, I'll be able to give more details with the updates, so I look forward to being less guarded.  While I'll be able to post more about the ongoing campaign, I'll also only be able to post so much about that game I run at Gary Con since it will then be spoilers for the ongoing campaign.  What a tangled web we weave.  More coming soon, I hope!
Posted by Mark CMG Clover at 8:43 AM