The Cooperative Dungeon project which began with an idea from Rene "Trainz" Mongrain and the EN World community, with the assistance of Creative Mountain Games and many others, has surpassed the fifty thousand downloads milestone (downloads of CD1 through CD4, collectively).  I'd like to thank everyone involved in the projects, the artists, writers, editors, proofers and purchasers, along with the EN World and gaming communities at large, for making the projects possible and being so supportive of the final products.

All of the individual adventures, statted for the ERA 3.5 system, have been run and played by many of you but for those who still haven't had the opportunity, here is a rundown of the adventures . . . 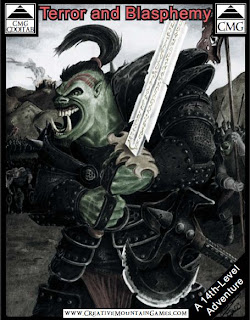 Cooperative Dungeon 01 (14th-Level) - Terror and Blasphemy The marilith, Blasphemy, has spent many years building up her complex and gathering minions to her aid. It is up to a strong group of adventurers to remove her from this plane, permanently, either for the good of all or in an effort to replace her as a rising evil force for others to fear.

With thirty encounter areas, and many traps, this adventure is big enough to be run over several sessions. Although designed as a 14th-level adventure, many of the encounters and tactics used by the creatures within border on the VERY difficult side. Experienced DMs might want to be prepared to give their players a break if they begin to complain, cry, or whimper... 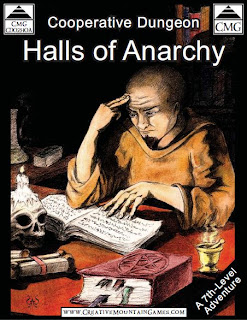 Cooperative Dungeon 02 (7th-Level) - Halls of Anarchy The Silver Coin Guild has a much darker side that goes well beyond the usual purview of thievery. Children have gone missing. Rescuing them and putting an end to this rising evil is not going to be an easy task.

Make sure your players have some extra characters in reserve for this deadly 7th-level trek.

Warning: Has the potential to contain mature themes... 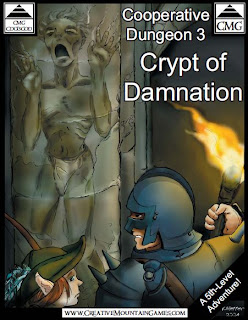 Cooperative Dungeon 03 (5th-Level) - Crypt of Damnation This crypt is both the former home to the cult of a dark god and a place of lost knowledge.

The history of the crypt is convoluted, and many who once used this crypt to house their dead have gradually died out or moved on, leaving behind only the uneasily slumbering corpses, and worse, to protect their unholy places from un-sacrilege. Since the last cultist passed, the tomb has remained sealed for the most part, though some have found ways to venture within.

Who will brave the interior of this deathtrap next? 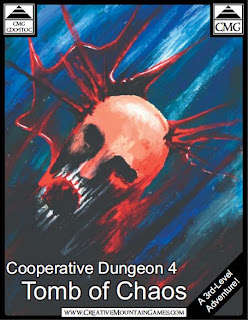 Cooperative Dungeon 04 (3rd-Level) - Tomb of Chaos This very challenging adventure uncovers a burial place of dark secrets and corrupted use.

Once the tomb of the ancient king Toth Nekamek, lord of a quasi-Egyptian realm who lived several thousand years earlier, its great halls and secret chambers have been violated by unspeakable evil. The outer rooms dedicated to the worship of the jackal-god Chacal, have been desecrated and now house those with nefarious intent but that is only the tip of the pyramid. Deep within must surely lie the secrets and treasures of a forgotten empire, along with their vigilant guardians.

Can those who enter ever hope to come back out alive?