Well, we just got done completing the final session of the summer Pathfinder group's campaign and it ended with a huge dragon battle.  This wasn't particularly surprising, since the group had discovered just prior to my stepping in to Game Master that a Great White Wyrm was working through agents to undermine and manipulate their adventuring agenda.  They had ventured to an island controlled by Dragons and populated by barbarian tribes.  In my previous post I had recounted their initial struggles against the barbarians and other inhabitants, including Ents, a Copper dragon (actually a Gold Dragon in disguise) and a Druid who stayed out of the direct conflicts but assisted the party for a fairly steep price.

Now they traveled farther into the dangerous landscape of the mountainous northern heights of the island.  They meant to confront the three sisters, three dragons working as a doormat for the Great White Wyrm.  Through some treachery, the barbarian elders managed to steer them through the ruins of a temple where many traps would need to be bypassed, which they did fairly well, then into a cavernous area from which there was no escape to confront the three sisters and the Great White Wyrm together.  A four hour battle ensued which shifted back and forth several times though eventually the party was victorious. 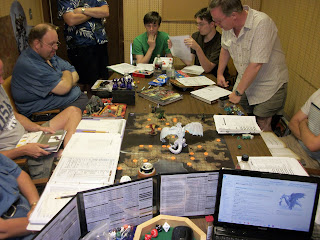 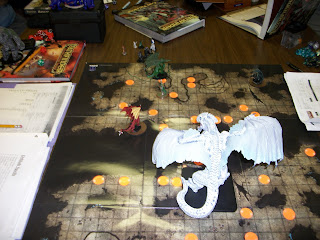 Email ThisBlogThis!Share to TwitterShare to FacebookShare to Pinterest
Labels: Games Plus, GMing, RPGs