Recently one of my regular groups had the chance to dust off the classic Dragon Strike game.  We had a lot of fun with the simplicity of the characters and a good laugh at the video which could actually confuse newer players as to the proper playing of the game.  While a board game, it has at its core a spirit akin to TSR’s D&D of the day, some RPGing elements, as well as the mechanics of many good mini skirmish games.  Certainly, it has all the basics of the above. 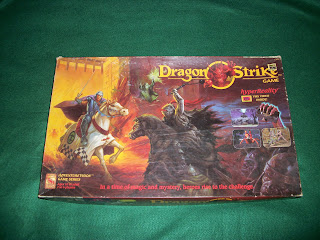 Like the video, the box can be a bit deceiving in that there are no mounted characters or monsters.  It evokes the feel of a cool combat game, though, so perhaps the details aren't all that important.  The name, at least, lets you in on one of the core mechanics; a dragon is going to strike any group during an adventure if the players dawdle. 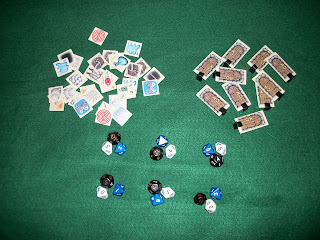 There are a good amount of components, rather impressive, really, but it should be remembered that this game was released in part in answer to the success of HeroQuest, so much of the accoutrements will be familiar to anyone who played that game or its expansions.  The mechanics differ significantly but the underlying play experience is quite similar.  There are obstacle counters, pits doors, traps, etc., as well as three dice, an eight-sided, a ten-sided, and a twelve-sided die.  I picked up five additional sets from Games Plus where we play so that everyone could have their own set and gameplay would be quickened. 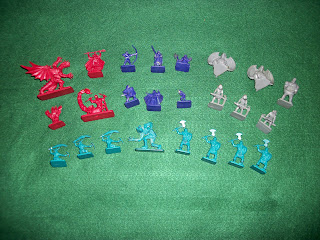 The miniatures are simple without much detail but there are a good many of them.  The secondhand game I picked up was complete but the minis had been painted with varying degrees of success so I soaked them in Simple Green over night then stripped away the paint with an old toothbrush.  There are six characters, only five of which come into play, and lots of monsters including a dragon, of course, the evil mage, and many others.  Incidentally, I found out that American Science and Surplus had a ton of sprues of the original Dragon Strike miniatures, just the grey and the green, though, so I bought a ton of them for pennies on the dollar to fill out a number of factions for some mass combat games I was running at various gamedays and conventions.  It’s my understanding that they still have dozens of them, though only a handful in the store, so if you want more than they have on hand talk to the manager and I am sure they can arrange to get you plenty more. 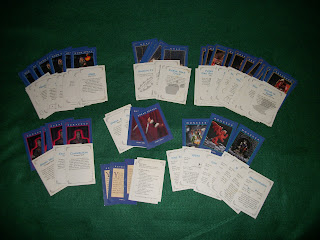 There are a number of card decks, the treasure and trap decks which the players will draw from during the course of adventures, and spells cards for the evil mage as well as for the player character spell casters.  There are sneak attack cards for the thieves and reference cards for all of the characters to help them choose their actions during play.  Each monster also has a card with its stats and information on how it operates. 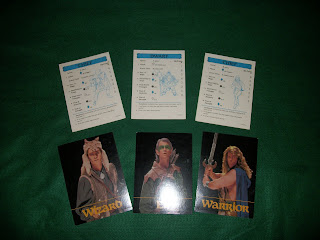 The character cards are larger with a photo of each as seen in the video, very Eighties though the game came out in 1993.  On the reverse side are the stats and other information. 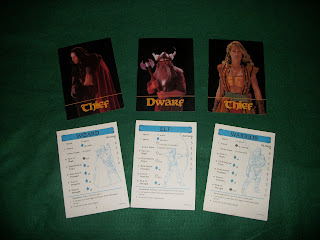 There are some clips that come with the game that allow you to stand up the character cards and other clips to put on the side and slide up or down to keep track of hit points. 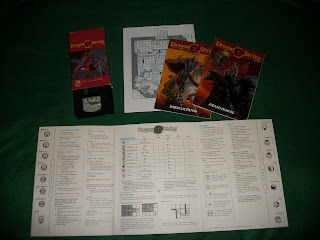 For the Dragon Master, as the game facilitator is called, there is a DM screen, a rule book, an adventure book, and a map book.  Some of the same clips used to keep track of player hit points can be used to keep track of monster hit points along the edge of the DM screen.  Since the spell cards act as the other manner in which bookkeeping is handled, there’s no need in this game for paper or pencils unless you wish to make notes on the maps for various things. 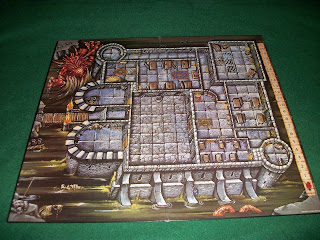 There are two two-sided map boards to represent the four different environments in which adventures can take place.  There are a castle map, a cavern location, an outdoor environment, and a city map, too.  If you find a secondhand set of this game, even if incomplete but still containing the map boards, you might want to pick it up just for the kitschy battle maps. 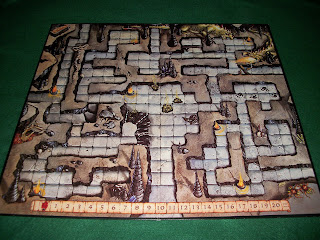 There are over a dozen different scenarios from which to choose, that can take place in the various locations, depending on the number of players and the level of difficulty at which the DM wishes to challenge the players. We cherry picked a handful of them starting off with easy ones and progressing through to the toughest. 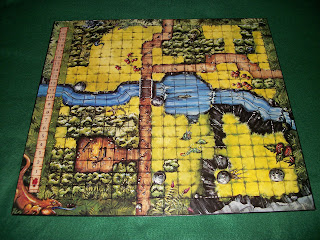 The maps are kinda cool, illustrated in three dimension, though they all include some features which actually come into play and others that are to be ignore, serving only to give some character to the locations.  They are divided into one-inch squares to facilitate ease of movement.  The maps in the map book show the DM where the monsters are and they are added to the boards when the player characters come into line of sight. 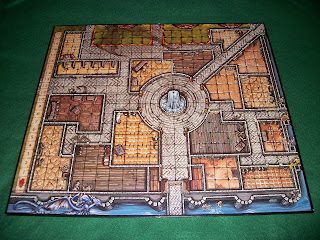 Along the side is a timer track that lets the players and DM know how long the adventure is meant to take and when the Dragon will Strike happens if the adventurers take too long on their various quests.
All in all it is a fun and fast-paced game suitable for beginning players of the genre.  The level of complexity is low so it is unlikely to challenge seasoned players of similar RPGs or board games but can be a good way to pass an evening and steep yourselves in nostalgia.
Posted by Mark CMG Clover at 11:54 PM