Pathfinder Group - Called Up from the Dugout

So it appears a group of regular players at the local game store, Games Plus, needed a replacement GM and I was asked to step in.  They've been playing Pathfinder for the last few years, having converted their 3.5 Eberron game over after giving 4E a short run for its money.  Their GM to this point for some time is moving out of state and one of the players is familiar with my GMing style, and thought I would be a good fit.  The group which has been continuous at Games Plus for nearly thirty years is known as Flame World, as homage to an early campaign, I believe. 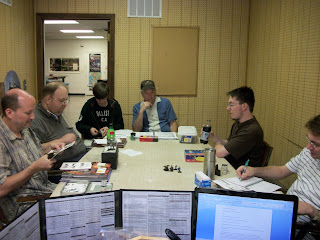 They have a dozen plus people in the group, any six or eight of which might be available on any given week to play, so there are some logistical things to keep in mind when running such a game.  Although I had not run any PF directly in the past, I have the core book PDF, access to the PFSRD website, and have downloaded some monster cards and other bits to assist me in keeping the current campaign going.  Although they were fine with me switching system and settings if I felt that I needed to do so, I decided to maintain the system and transition from the setting.  They were often away from the main areas in the setting anyway, currently off on an island mission that really could be anywhere, so that shouldn't be too jarring.  Certainly keeping the system made sense, since they have all invested in the core book as well as in numerous supplements.  Since I run games with my laptop handy and could use some landscape oriented inserts for one of my GM screens, it seemed like the way to go, though I also wanted to give them a chuckle with what I might put on the players' side of the screen. 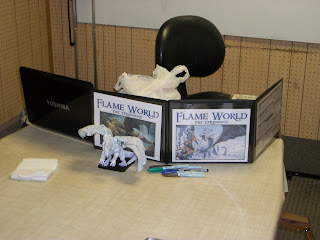 For the players' side insert, I snagged some images from the PF core book and added some appropriate text, "Flame-World" subtitled "The TPKening" just for a laugh.  I cut up the landscape alphabetized skills charts and rearranged them into more useful groupings for my own GMing style.  The campaign currently is about tenth level (I asked those who were lagging to raise their characters to that level to put all of the PCs on the same footing and to make encounter design going forward somewhat simpler for myself.  They've recently discovered that the agents of a Ancient White Dragon having been sending them on quests to secure items for their master that the Wyrm intends to use against the party.  Now on its islend, they have located where its lair but have several other foes to defeat before they can even hope to get close and destroy this evil menace.  It's already shaping up to be a good campaign and I'll blog more about it in coming weeks.
Posted by Mark CMG Clover at 11:17 PM

Is that the Savage Worlds GM screen?

It might be. I've had it awhile and have had a number of those types of screens that use inserts. They're very useful and I prefer them over premade screens.