One of my weekly groups was between other large roleplaying game campaigns and we’d been playing board games and card games for a little while as we determined our next move.  There are a few different roleplaying game systems I have tried in small doses, or merely read, that I wished I could have given a more extensive forum for play.  Since summer time tends to cause random absenteeism among gamers, myself included, I thought about which games might lend themselves to smaller numbers of players who might come and go from week to week.  The episodic, low-prep, Prince Valiant seemed like a good fit. 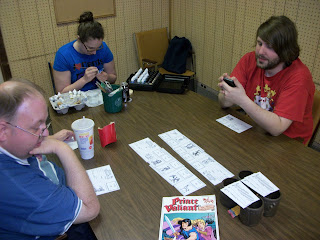 Prince Valiant The Storytelling Game was published in 1989 by Chaosium Inc., designed by Greg Stafford with William Dunn and Lynn Willis.  It (mostly) used illustrations by Hal Foster, who created the Prince Valiant (in the Days of King Arthur) comic strip in 1937 which continues to be syndicated with other artists at the helm by King Features.  The game employs a simple coin flip mechanic that manifests in a number of useful ways.  Heads is good and Tails is not.  It's also good to be flipping multiple coins, to get positive modifiers to your flipping, and sometimes to get more Heads than an opponent in opposed situations. Within a little over one hundred pages, the rulebook includes a one-page version of the rules, a basic game, an advanced game, and some optional rules, as well as a pile of scenarios for adventure and character sheets, some ready for play and others blank.  In the simple forms of the game, one player acts as the Storyteller and facilitates the adventures.  In the advanced rules, any and all players at the table can have their turns running the game, even during the very same adventure, everyone adding to the story as it develops. 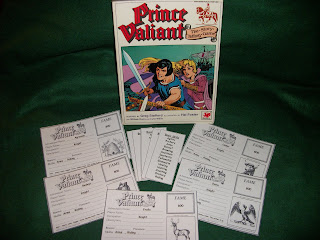 One major change, and some might cringe at this, was to substitute dice for the coins, a one, two, or three being Tails and four, five, or six being Heads.  What can I say?  We like rolling dice.  To that end I brought along plenty of six-siders and some dice cups from Pirates of the Caribbean Dead Man's Chest Pirates Dice game I picked up on the cheap when the Gamers' Paradise Chicagoland chain of game stores was going out of business a couple of years ago.  As some might recall, after they decided to close down they moved all of their stock to just three stores and in their last two months they began discounting their stock, beginning at 10% off, then 20%, and kept increasing the discount until they were at 90% off in their last week. This game, with its dented box, was one of a number of things I grabbed in the last couple of weeks. 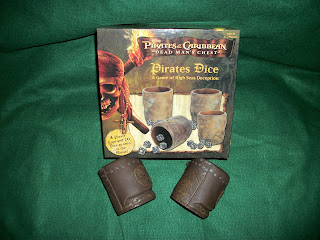 Rather than beginning with the one-page rules, I opted to start the group all as Knights in the basic game.  I took some of the blank character sheets and added some of the starting information to a dozen of them including names, class (everyone begins as a Knight), two of their six starting skills (Arms and Riding are possessed by all Knights), beginning equipment, and 800 Fame points.  I gave them names beginning with the twelve first letters of the alphabet to avoid a stymied player from being Bob the Knight or Sir Osis, to help preserve some sense of a serious setting.  For some games those sort of naming conventions can be fun but I prefer the jokes to be part of extemporaneous table talk rather than ingrained in the characters.  I also added some clip art as crests for the Knights, suggesting that the players choose something that would symbolize the type of Knight they might be trying to conceptualize.

The players divide seven points between the two possible attributes of Brawn, which covers most physical exploits, and Presence, which covers non-physical areas.  They chose an additional four skills and divided nine points between their total six skills.  Their gear included a sword, a lance, a dagger, a standard horse, medium armor, fine clothes (as befits a Knight), and 5 gold pieces.  This is all standard character creation and outfitting as per the basic rules. Since this game wasn't to include large battles (at least for now), I did suggest that players not choose the Battle skill which replaces the Arms skill when characters are involved in Mass Combat.

We began with the back-story being that the three characters had been knighted, starting them with the standard 800 Fame for such, 500 for beginning characters plus 300 more for being knighted.  Prior to the start of our campaign, the Knights had helped stave off a Hun attack on their town and castle, gaining their knighthood as reward, each previously being part of the castle guard.  Of course, they wanted to celebrate right away, so off to the Sickly Boar Tavern for drinks and carousing.  The tavern keeper felt compelled to treat them to a night of free drinks because of their part in saving the town, and they enjoyed themselves, though with temperance since they also had a mission the next day to track the retreating Huns and ensure they were not going to rally and return.  A couple of local toughs, pig farmers, were asked to give up their table for the illustrious Knights, which they did begrudgingly.  After the evening's festivities, two of the Knights returned straight away to the castle though one opted to check out a local inn rather than retire to his usual room in the castle.  Along the way, he was waylaid by the pig farmers who had been lying in wait hoping to catch one or more of the Knights unaware.  The brawl that ensued was little challenge for the Knight and he finished them in short order then secured lodgings and slept fitfully.  The next day the three Knights retrieved their horses and were off to track the Huns and this is where we left off for the session. We'll pick it back up this week and I look forward to seeing how they handle themselves against more serious opponents.
Posted by Mark CMG Clover at 11:08 PM

One thing that might have worked really nicely is to use Ubiquity dice. The Ubiquity system goes with the philosophy of using whatever dice are at hand, they'll all come up 50/50. Ubiquity dice are 3 different colored 8 siders numbered to count the successes on 1, 2, or 3 dice. So if you need to flip 5 coins you'd roll the 3 and 2 dice and count up the number of heads that the dice show.

That would be interesting but the handiness of six sided dice is one of the things that made the decision to switch from coins to dice possible.

I love these comics, and based on a review I read (http://www.rpg.net/reviews/archive/9/9189.phtml), I think I would love the game!