I've been mulling over the in-game machinations of our weekly campaign using Prince Valiant: The Storytelling Game over these past three weeks and I have to say I like where it has been heading.  Mostly I have been the main storyteller but I have made sure to pick up on cues from the other players and take the game in directions they have opened through their roleplaying.  We skipped over the one-page rules and went with the basic game where everyone begins as a Knight.  I made up some player character cards with crests and Arthurian names to give a head start to the game but have otherwise taking the lead of the players and developed a story that they wished to follow.  I have, of course, added many details to the framework we have created and threw in plenty of potential antagonists, but for the most part I have allowed their actions to dictate which bad guys (or girls) came to the fore and which others became allies or neutral parties to be used as NPCs or henchmen of the Knightly band. 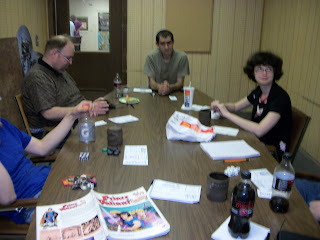 We had three players the first week, as two of the semi-regulars were both MIA.  One joined us in week two but the full slate of five players were on hand for the third week.  Summer can be a tough season to keep a full group week after week and the sporadic turnout was fully anticipated, hence the use of a simple system that lends itself to malleable gameplay.

We used a passive in media res launch point for the campaign in that the players were meant to begin as Knights and we decided that the campaign would begin just after their knighthood kicked in.  This came by way of outstanding behavior during a Hun attack on the town and castle where they served as guards.  Naturally, they (Sir Dristan, Sir Joffrey, and Sir Gaenor) wished to celebrate their new status and accepted the invitation of a local tavern owner to have a night on the house.  The Sickly Boar, named as a vague homage to the Vulgar Unicorn but in-game as an subtle insult to the previous owner, was crowded that evening and two muscular pig farmers were told by the tavern keeper to give up their table for the illustrious knights.  Of course, this didn't set well with the farmers and they immediately developed a grudge against the knights.  After some judicious carousing, two of the knights (Dristan and Gaenor) returned to the castle and their regular digs while Sir Joffrey opted to go across town to an inn for the night.  Naturally, the pig farmers were lying in wait for the knights and simply lucked out that one was on his own.  Joffrey did, however, make short work of them.

The next day the first task set by Queen Alyta (ahh-LEE-tah) for the new knights was to trail the surviving Huns and ensure that they were suitably subdued by losing in the attack and that they were in no way planning to return any time soon.  Recon, only, unless sterner measures were needed and warranted given they were a force of only three.  Although a few days old, they picked up the trail and made up some time by hustling on their riding steeds (and only wearing their medium armor and lightly encumbered otherwise).  Although they closed in on the retreating Huns, when they came to a bridge-crossing of a stream with steep banks, they found that the bridge had been disabled, but not completely destroyed, a rush job obviously.

Continuing further upstream in hopes of crossing at a known ford to rediscover the trail on the far side, they found the ford guarded by Sir Victor, a knight errant currently with no allegiance to any lord or lady.  He offered combat as an alternative to paying a toll and the challenge was accepted.  Armed combat on foot ensued and Sir Victor was victorious in his bout versus Sir Dristan.  Would they get across the water to catch up to the Huns and complete their mission?  More next time . . .
Posted by Mark CMG Clover at 4:41 PM