Our weekly group took a couple of weeks to try and beat the Lord of the Rings (2000) cooperative boardgame from Fantasy Flight Games.  This was released in 2000 and designed by Reiner Knizia.  It's for two to five players and takes a little over an hour to play.  The first week, while learning the game, we had four players and got most of the way through Mordor before the last Hobbit fell to Sauron.  The second week with five players we got our asses handed to us the first try, collapsing in Shelob's Lair, but beat our previous week by getting even father into Mordor, though we failed to get all the way to the end.  It's a tough game to beat.  Although we have two of the expansions, Friends & Foes plus the Sauron set, we want to try and beat it as is before adding more complications. 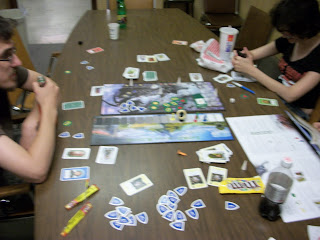