Our playthrough coverage continues from here!

The players have been doing well in our playthrough of the 5E Starter Set adventure but the final encounters of sections have been eluding them.  The adventure is designed to be very campaign-like, so villains often plan for potential escape should things not go their way.  My players have yet to properly corner their finale foes and even a few higher-up underlings have managed to slip through their grasp.  This can mean a bit less experience and we'll see how that affects their leveling process. 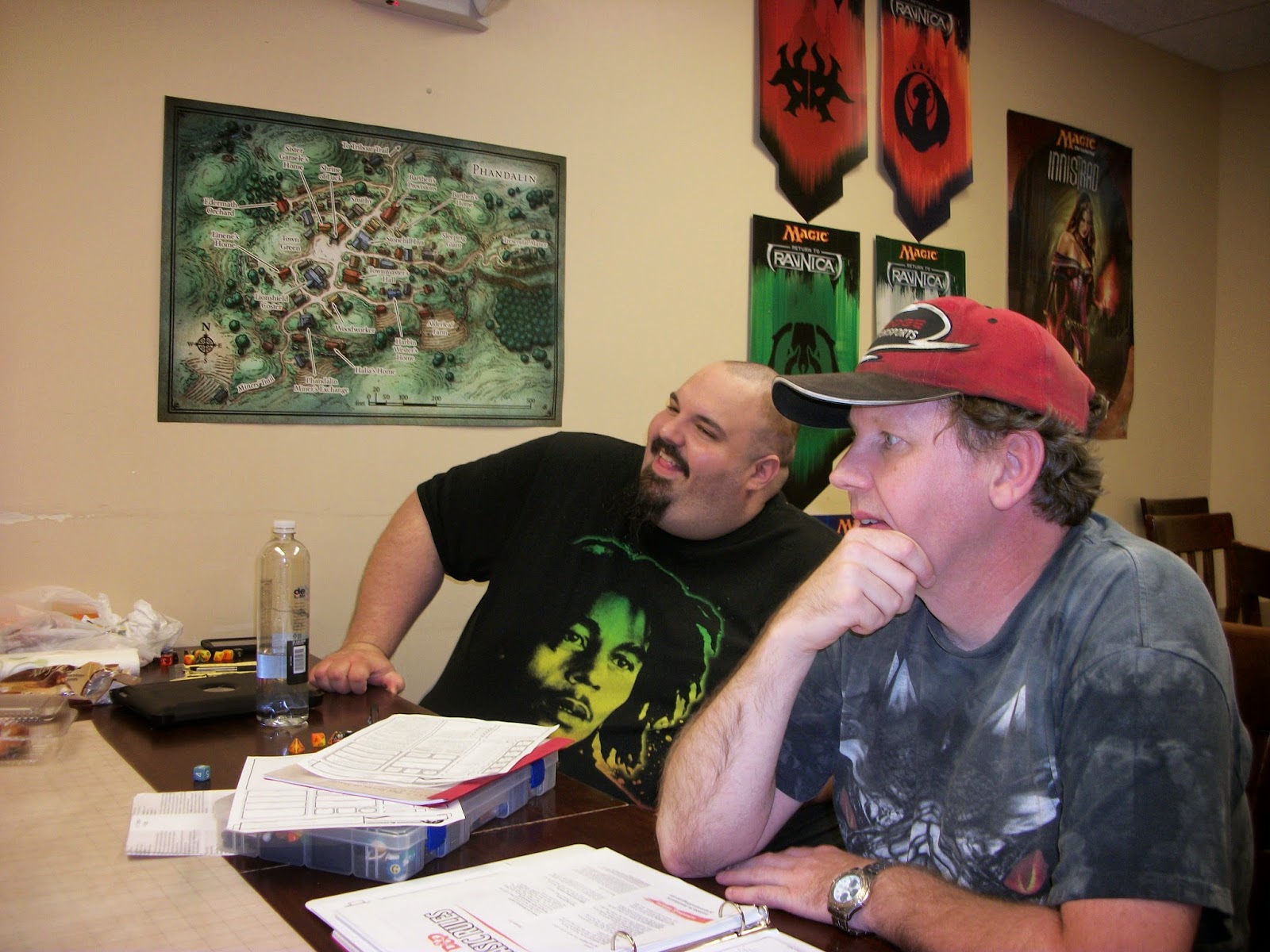 Looks like we will be playing weekly, rather than every other week (with an occasional in between game), so hopefully this helps folks with their immersion.  This is a good roleplaying bunch and I don't worry about that part but remembering details between games can be tricky.  As mentioned in previous blog posts, we're using a Facebook group (private) to keep track of stuff so that helps, but only if they keep an eye on it and participate.  They do for the most part. 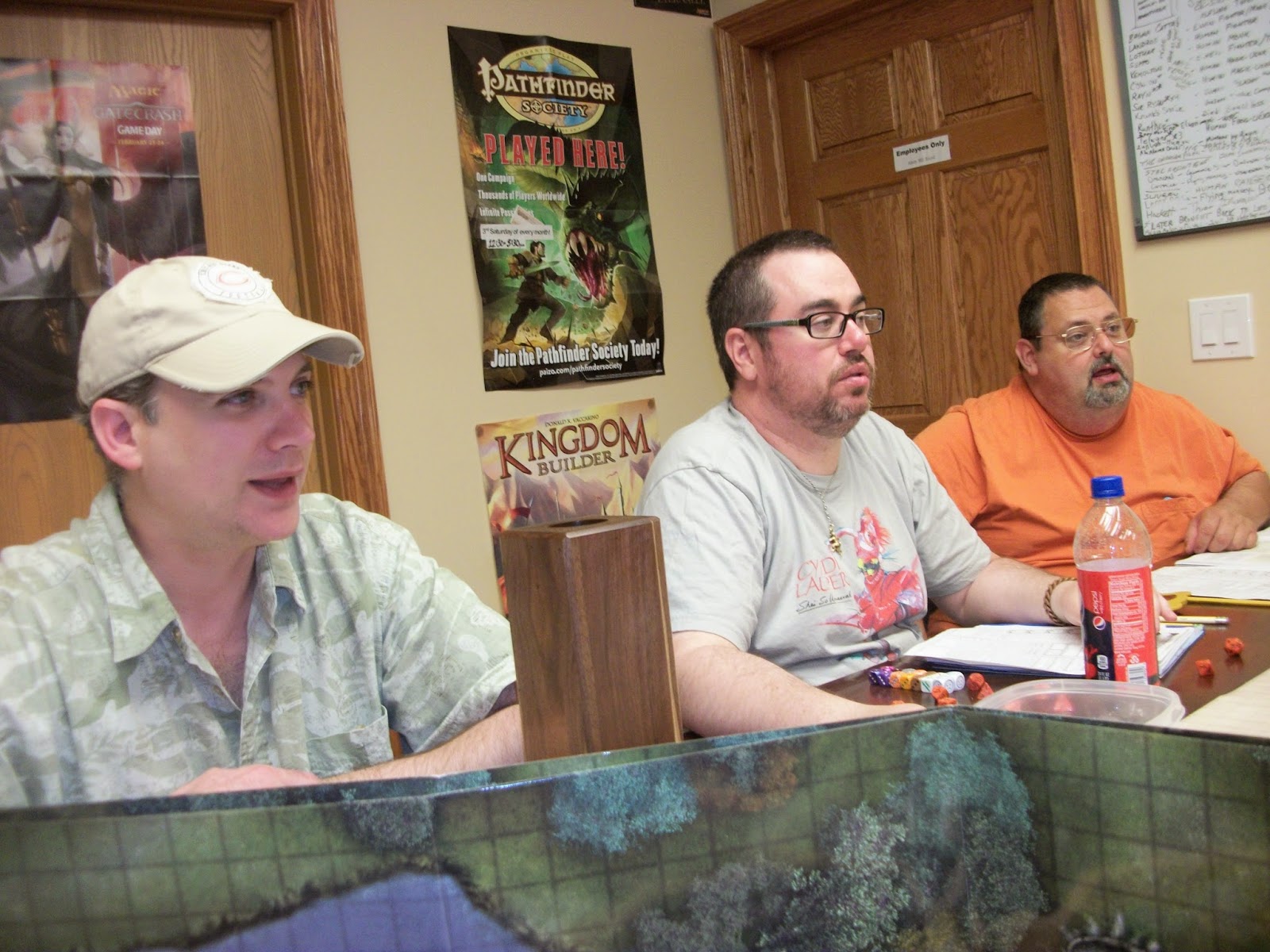 Note that I am using a Paizo Flip-Mat as a GM screen.  I wanted to keep it handy for possible forest encounters anyway.  I'm still figuring out the best way to create some inserts for a GM screen.  I've got a four-panel portrait-orientated version as well as a three-panel landscape-orientated version but it's really more a matter of what information and charts stuff should go on customer sheets.  A list of Passive Perception numbers should certainly be well-positioned.  I suppose some of the other player ability scores and such would be good but I don't want to take any more out of the players' hands if I can help it.  What would be your ideal GMing screen configuration or inclusions?  Anything that is specific to the Starter Set that might not make a regular screen down the road like a list of the quests/hooks? 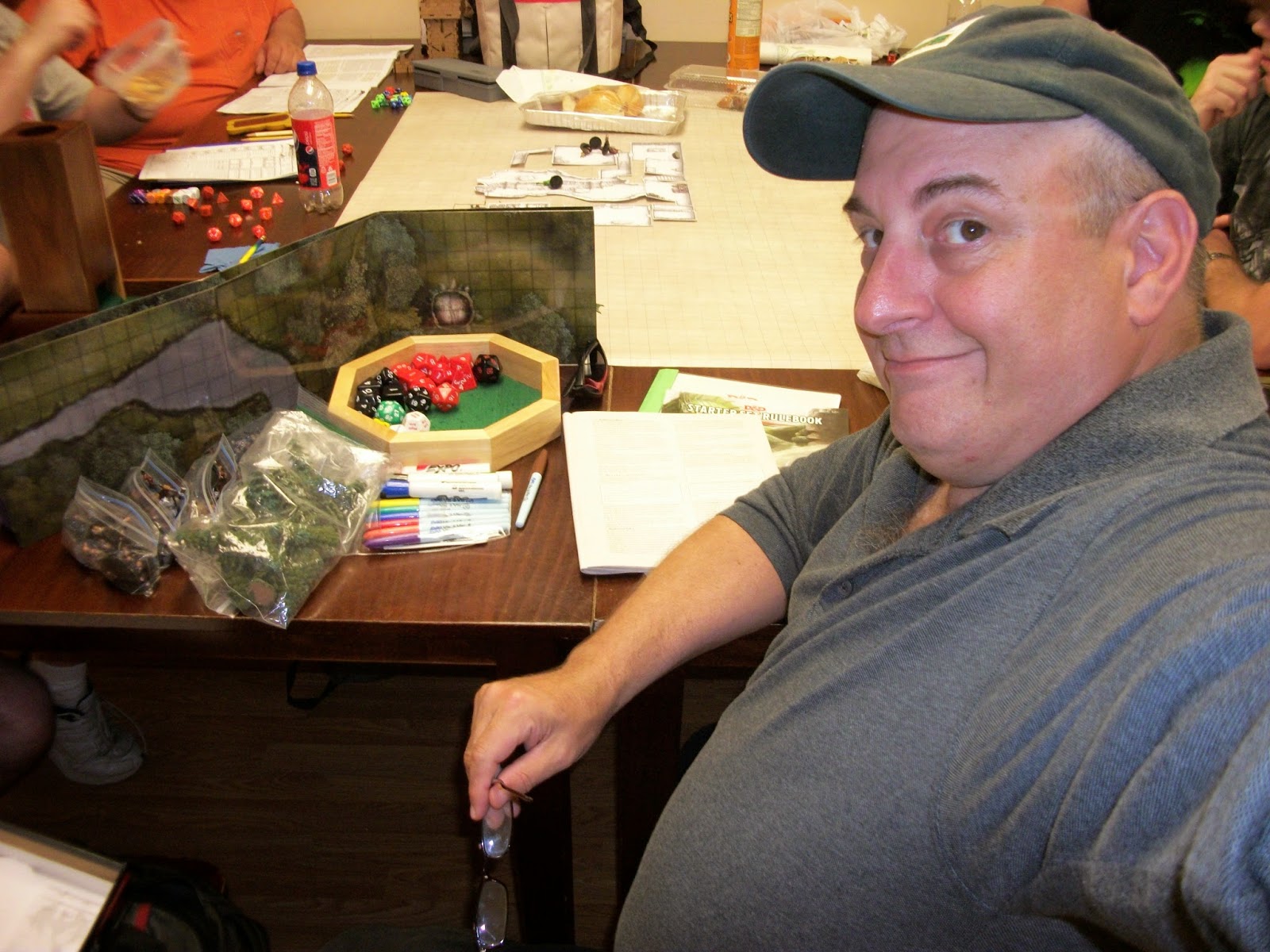 This week I wore a neutral grey shirt to ensure the dice would roll fairly.  But speaking of quests and plot hooks, in a thread over on EN World, "Remathilis" toyed with the idea of making some Quest Cards to help the players and GM keep the plot hooks in order.  I took this concept, made some adjustments, and use them in the Facebook group.  I can't share them here, as they fall in that area that might be infringing but you'll get the idea from the thread and can fashion some to suit your own group if they appeal to you.


From here down, expect spoilers and do not read on if you intend to play in rather than run a Starter Set adventure of your own.  My own players should avoid the text below as well!

In this latest session, after clearing out the Goblin Hideout last time and spending some time in Phandalin, the party had a handful of ideas what to do next.  They had decided the Redbrand threat was most pressing but also figured it went hand-in-hand with searching for Sildar's ally Iarno as well as discovering the fate of the woodcarver's family.  All of these pointed toward the manor ruins, so after fighting and locking up four Redbrand Ruffians in the Townmaster's cells, alongside their previous captives, four Goblins, they opted for a short rest over breakfast at the tavern.  They had a few wounds from which to recover and an hour to eat and collect their thoughts made good sense.  What they didn't know was that the Townmaster still fears Glasstaff, the Redbrand leader, and his ruffians more than the PCs just yet.  The Townmaster staged an escape while the party was having breakfast, so I had Pip, the innkeeper's son run in with the news of the escape, giving them a chance to recall the secret tunnel should they need options on how to assault the Redbrand Hideout.  They still chose a direct path to the ruins and information from one of the party (the Halfling was a former Redbrand), they knew where the cellar stairs were in the ruins.  On their way, they popped in the Sleeping Giant, a known Redbrand watering hole, to see if any ruffians were there. 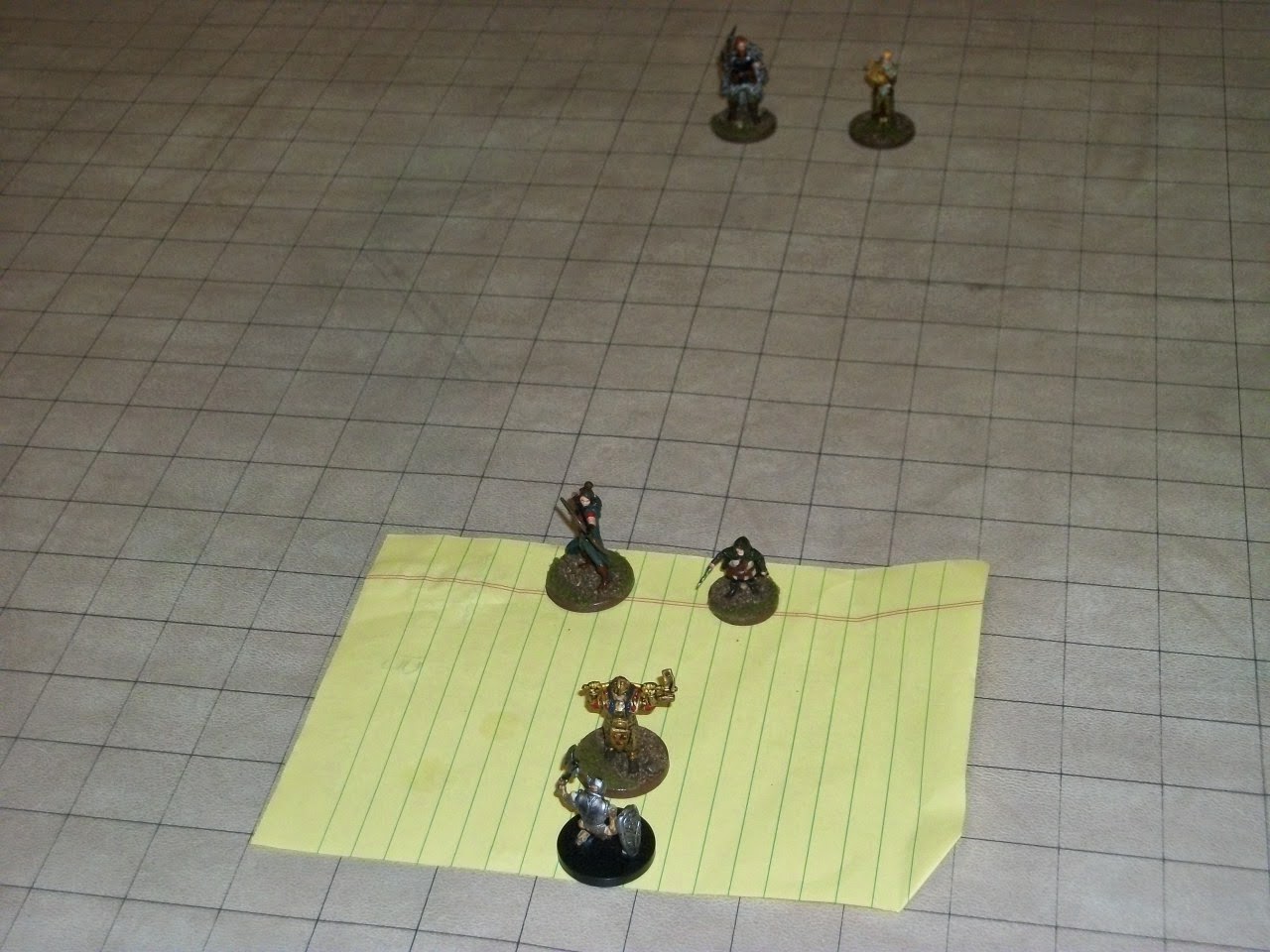 I might have had something more picturesque than a simple sheet of paper to represent the Sleeping Giant, but so it goes.  With a well-placed gold coin, the surly female dwarf spilled a bit more information than the players expected regarding the Redbrands though they had most of that information already.  They did get a better idea of the number of members, though it isn't the Redbrand Ruffians they needed to fear once in their hideout. 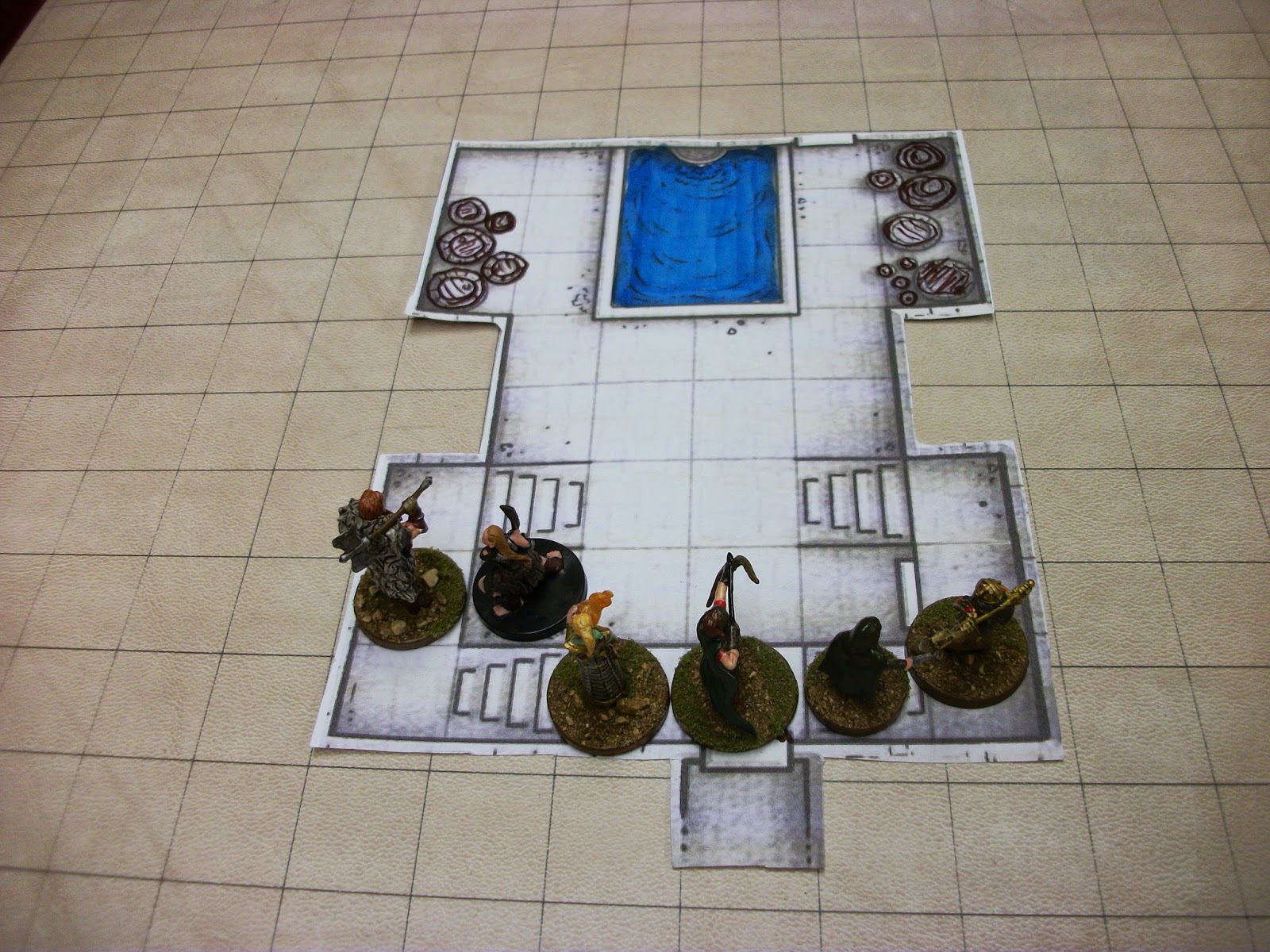 Descending into the cellar, after forcing open the door which had been moderately barricaded, one ruffian attacked from below.  I gave Advantage to anyone with high ground, so this posed little problem.  Several more came forth from the opposite door, the storeroom/barracks, but the group made short work of them all, taking one captive.  Still in fear of their leader, they would have fought to the death.  Even the one captured, was not going to give up any secrets. 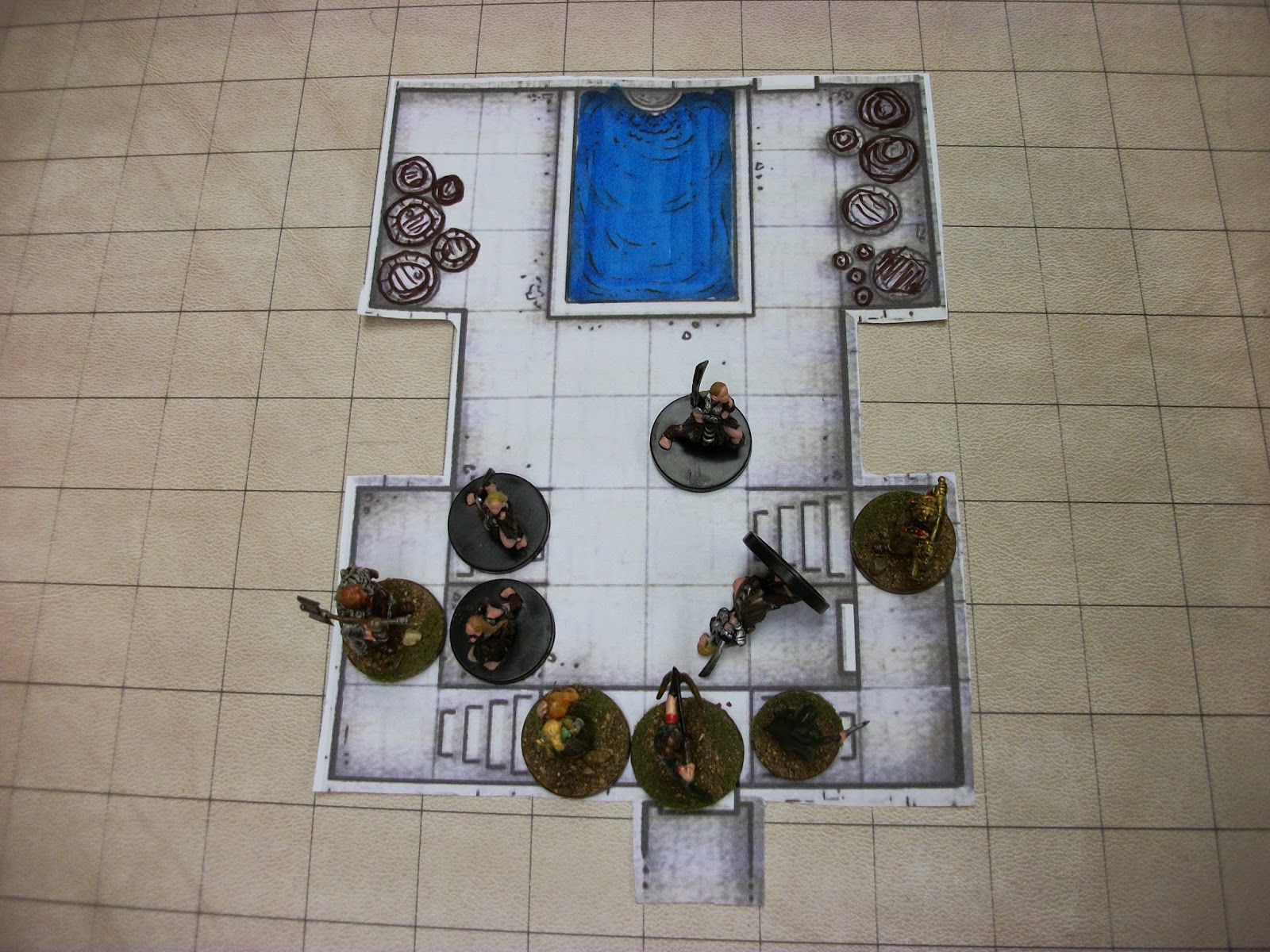 However, when the Noble Fighter threw the bound captive in the far left corner, it caused the PC to perceive the secret door there.  After a quick scavenge of the bodies, and the storeroom, and taking just a look into the hallway toward the crypts, they opted to take the secret way deeper into the complex.  A more thorough search would have been beneficial but more on that later. 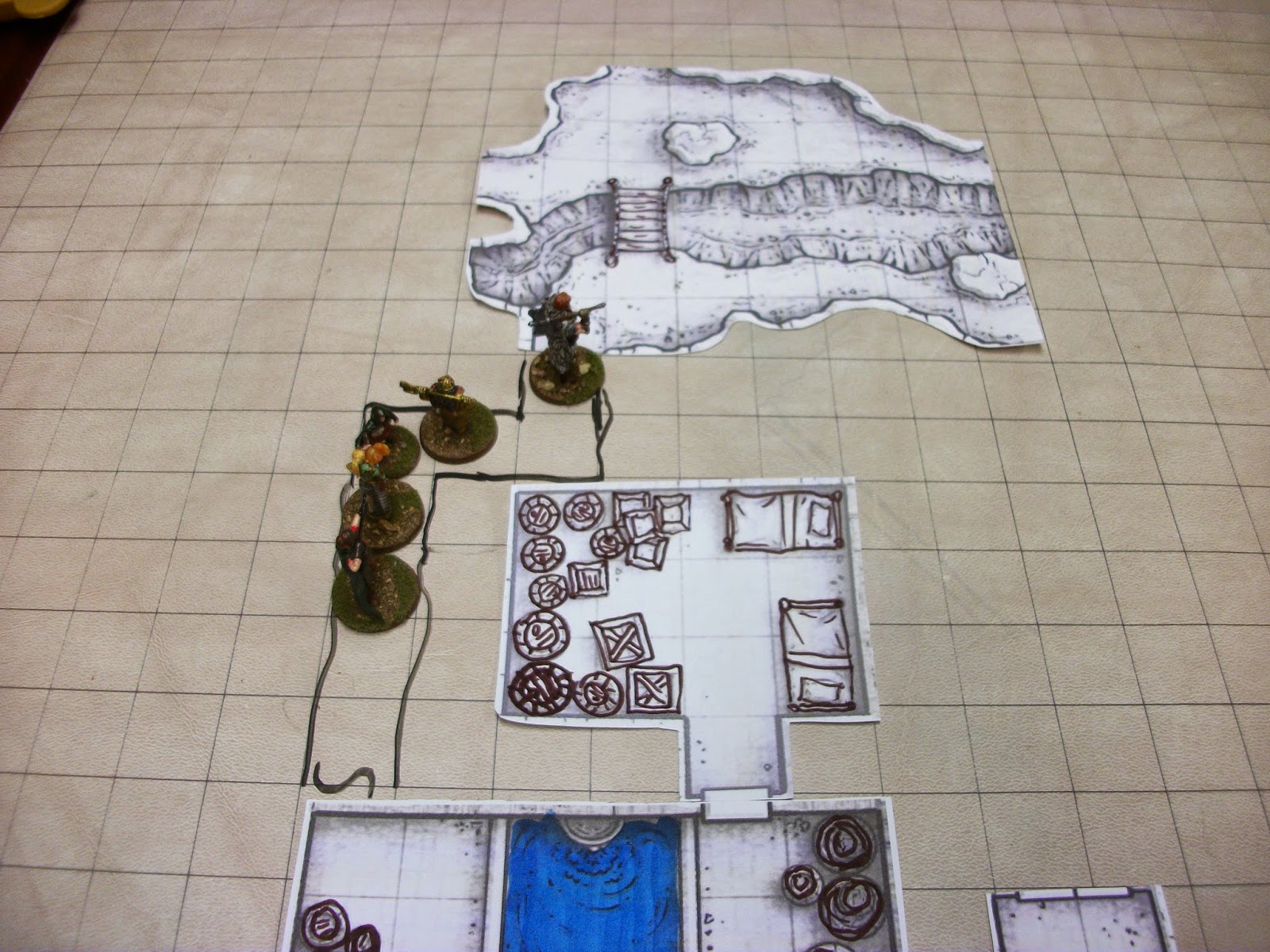 I made sure to repeatedly mention the lanterns hanging around but I guess the party felt they still wanted to have some light of their own, so the Soldier Cleric slapped a light spell on the helm of the Noble Fighter.  This may have been why he felt confident enough to move ahead of the group and, with only one end of a rope in hand, decided to chance crossing the crevasse on the southern bridge. 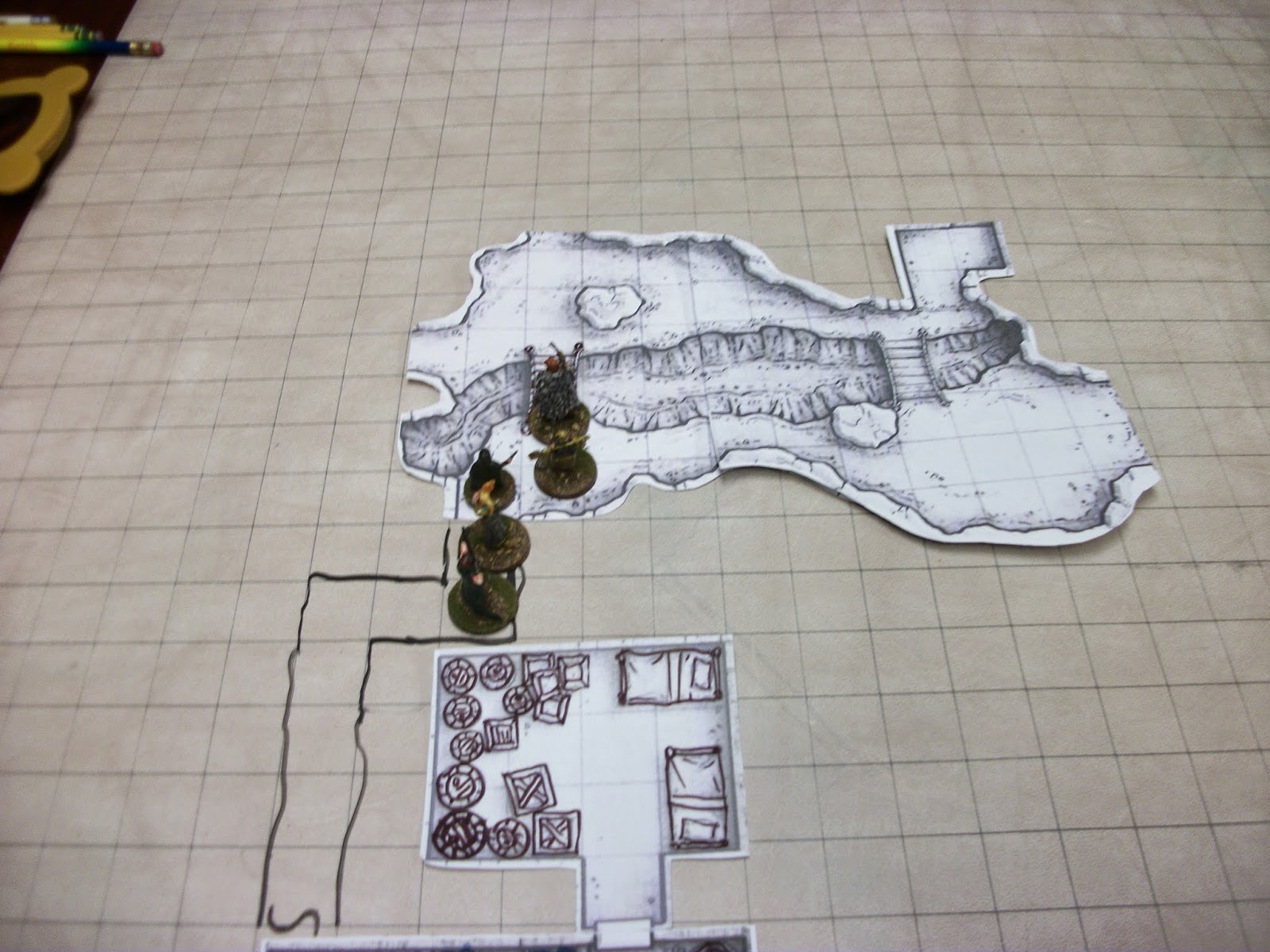 Being well-heavy-enough, the bridge collapsed and a failed strength check to hang onto the rope resulted in some damage to the Noble Fighter.  If the rope had been tied around him, I wouldn't have required the strength check.  It was around this time he began to hear voices in his head, mocking his dreams.  The players had been joking around a bit prior to play and as we got started regarding their backgrounds.  That was useful for the players as some knowledge of the Redbrands came from the Halfling.  It was also useful for me, as the Noble Fighter mentioned he wouldn't mind claiming the manor for his own and fixing it up.  The other players had a chuckle over his own home having been destroyed by a volcano.  With all this at the forefront of his mind, and him in the lead and now injured, as he climbed back out of the crevasse a voice in his head scoffed at his plans to secure the manor for his own.  As the Noble was being healed and not sharing this development, the voice in his head went on to chide him further for the loss of his birthright to lava.  It was truly one of those GMing opportunities that tied a lot of the early adventure session together. 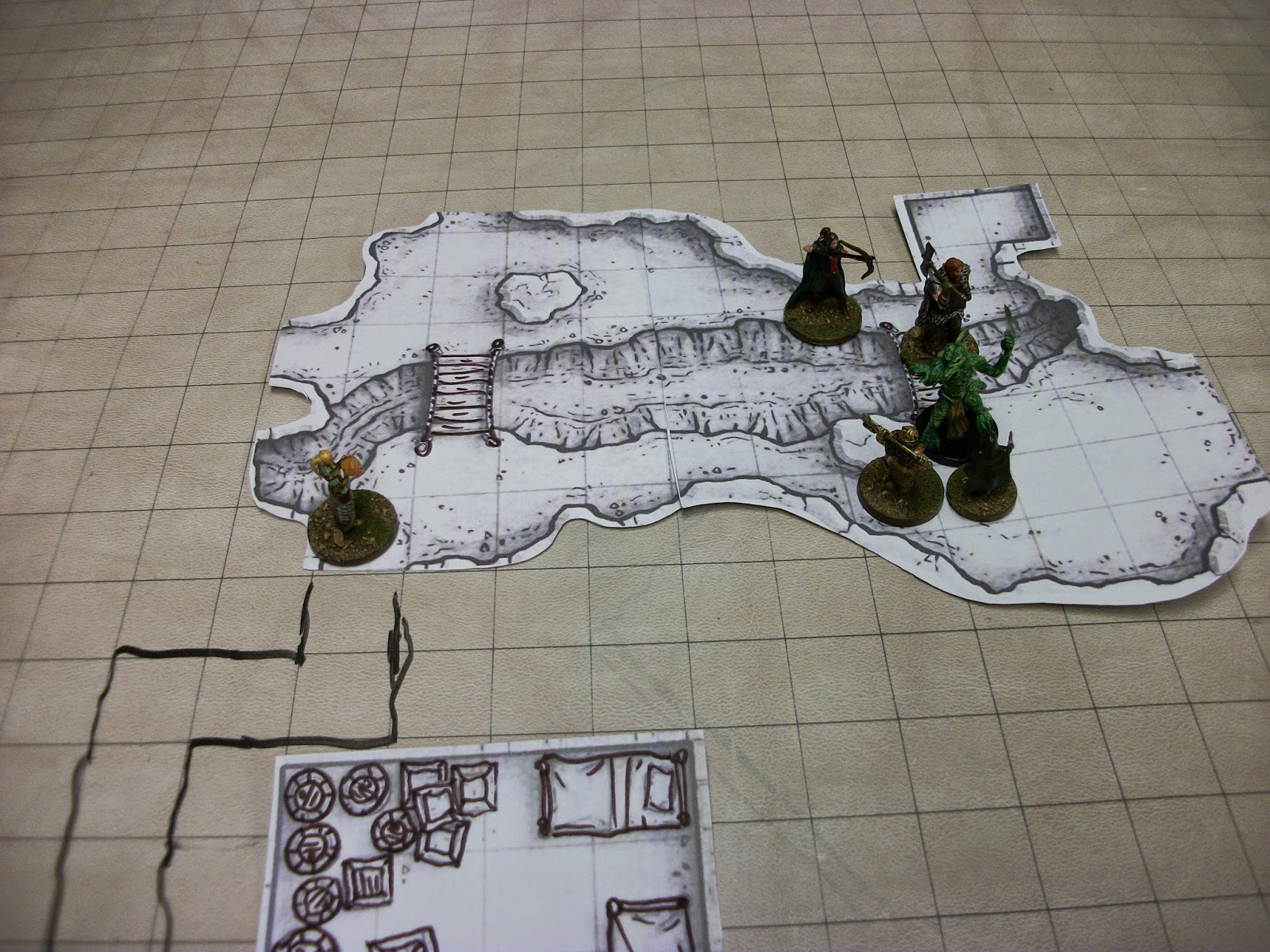 You'll note in the above picture that the Wizard is far on the left and everyone else has surrounded the Nothic that was mocking the Noble Fighter.  This might be deceptive.  It was actually the Wizard, not content to stand around and watch the Noble get patched up, nor having any interest in his accusations that someone in the party was saying things that the rest of the party couldn't hear because it all took place in his head, the Wizard moved further into the cavern and was surprised by the Nothic around the northern stone pillar.  Given Advantage, the Nothic rolled horribly.  The first of his two claw attacks missed with both dice and the second managed to strike but only for six damage.

After the surprise round, the Nothic rolled only moderately for initiative allowing the Wizard to disengage and get away while the Dwarf Cleric moved up to fill the gap and the Halfling moved up in support.  The Nothic had more trouble with the Dwarf after which the Noble Fighter leapt the crevasse and dashed up toward the other bridge, leaping the diagonal to land upon it, trusting his luck that at least one of the bridges would be safe, and it was.  The Folk Hero Fighter followed up by also leaping and dashing up the far side to help surround the crazy, one-eyed monster.

I'll post a bit more later today regarding the outcome of this battle and how the rest of the complex exploration played out, so make sure to check back in or watch for updates!