First up, a blast from the not-so-distant past as Skip Williams was running a 3.XE D&D game.  I toted my 3.5 PHB to the show with me so I'd be prepared.  As the early players were sorting through pre-gen PCs, I flipped open my book to check on some detail and out of the front cover slid a character I used last year in Skip's game, and it was the same as one of the ones available.  I hadn't realized that this scenario was a potential continuation from last year's adventure!  This topped off the opening day of the convention with triple goodness for me: playing in a Skip's game, playing the same character from a previous game with Skip, and continuing the story line for that character.  We had a heck of a good time exploring unknown areas of the lower caverns from last year, following leads only to discover some information we got the previous year was less than reliable, and expanding our group's sphere of influence in the area.  Truly, a fun way to connect conventions with a sort of mini-campaign. 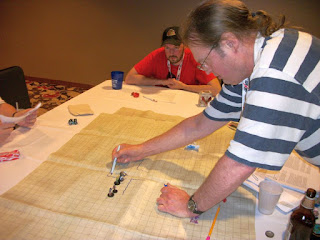 Skip Williams sets the stage for an encounter

The next morning, Friday, I had an early start (if 9 am can be considered early).  I was signed up for Jim Ward's Metamorphosis Alpha game.  When asked about survival rates in Jim's game, I quickly mentioned that I had never died by his bloodthirsty GMing hands.  True, on its face, but I have only played once at Jim's table despite knowing Jim for quite some time and being in places where his games were played since the 1970s.  How this situation has transpired is unintentional and odd, to say the least.  I tried once to get into his all-females game at Gary Con but the dress and wig borrowed from Michael Brown fooled no one.  I did have a beard at the time.

Sadly, toward the end of the Metamorphosis Alpha adventure, I received an emergency call from my family that needed to be taken (things are fine for now) and had to step away from the table.  Since I do not recognize the authority of a GM to kill a player character in player-absentia, I maintain my streak of surviving his games.  I was just fine when I stepped away and spoke to Jim right after the game to ensure he understood my position.  He has since mentioned that my character cannot have died under such circumstances.  He is wise in such matters and I will take him at his word.  We had great fun while playing, though, and I will be sure to avoid all spore-like creatures in the future. 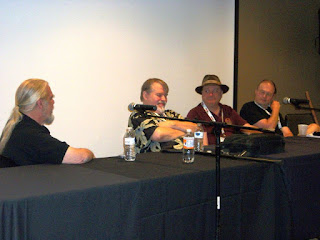 Friday night, after the TSR "Secrets" panel that was convened in the above photo (no real discussion of my characters took place, to the best of my knowledge), I joined Harold Johnson for a 1E AD&D game in the lower depths of Tamoachan.  It was a real race against the clock in a level where excessive burrowing worm activity had undermined the entire complex.  Those who tried to carry out too many of the gold bars we had discovered were nearly killed for their greed and hubris.  The rest of us managed to escape with only some difficulty.  There's a lot more to explore under there and I hope to have another chance to check things out further at a future convention or gameday.

On a meta-note regarding this series, I have enjoyed writing these D&D Thirty-Day Challenge posts and I hope many others will do so as well.  I may have to come up with another such challenge for percentile dice that requires writing something twice weekly and allows for two weeks of vacation.  I think it might be fun to roll those randomly and cross them off as they are accomplished.  It might also be prudent to open up the theme to all RPGing or even all gaming to allow for a broader array of blog topics.  More on that after a bit more pondering . . .