This one is easy because it is so close to my heart and I have run it a handful of times.  The adventure is Fighting Fire.  I wrote this one to help out my buddy Ernie when his apartment burnt down in Lake Geneva, WI, and he needed some assistance with the financial burden of moving to a new place.  So many of his heirlooms and treasures were lost, some that can never be replaced, but there was an outpouring from gamers of all stripes and the adventure I published was just a small part of that effort.  It did have some lasting effect, though, because when Ernie had some medical issues which involved his heart and several days in the hospital not long after, the sales of that publication could continue to assist him and the Ernie Gygax Relief Fund set up by his brother Luke.  It still sends a third of the cover price to him through that account, so feel free to pick it up here if you haven't already.  I have two sequels in the works, the second of the trilogy being called Cold, Cold Heart.  It has had a good deal of playtesting now, including with Ernie and some other notables about a year ago.

We had fourteen people around the table and Skyping in (Thanks, Benoist Poire!) and the adventure has seen several other playthroughs at conventions and gamedays like Gary Con, Gen Con, and others.  Even the third adventure in the trilogy, Head in the Clouds, has now been playtested by dozens of players.  But, second things second, and Cold, Cold Heart must come next, so I forge ahead. More on that as it gets closer to completion.  In the meantime, you can continue to assist Ernie with his ongoing medical bills difficulties (the bills really piled up and medicine is an ongoing concern!) by grabbing a copy of Fighting Fire - Ernie Gygax Benefit Adventure at RPGNow here.  Thank you for your support in this. 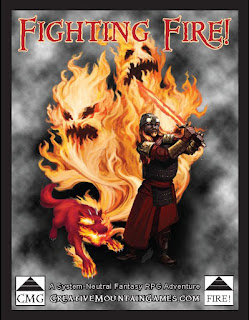