I've run my campaign for over four decades and, as mentioned in a previous challenge post here, I have advanced the timeline between campaigns five, fifty, and sometimes five hundred years.  However, there is an NPC I have carried along through all of the renditions.  His name is Portwert.  Just one name and I've never even decided if it is his first name or last, as some campaigns have been more formal than others.  I based him in part on Jan Gossaert's Portrait of a Merchant, c. 1530, which I had seen in an art book.  I simply liked his look and a character came to mind, a money-changer named Portwert. 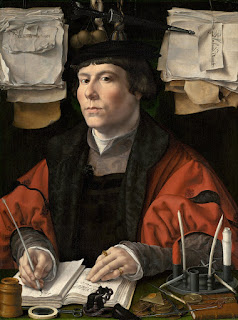 Because I make use of unusual coins in my game, his profession is always something I can feature.  When a treasure is found, the coins can be ancient and/or obscure, and many merchants won't touch currency they do not recognize, so off to Portwert the adventurers must go. He's not always in the best part of town but if money is to be made, someone will tip him off and he'll be sure to make his services known through an intermediary; sometimes that is a stable boy on his payroll for information and sometimes a nobleman who owes him money or a favor.  Get in good with Portwert and he can come up with fresh leads for adventure.  It's in his best interest, since it means more business for him. 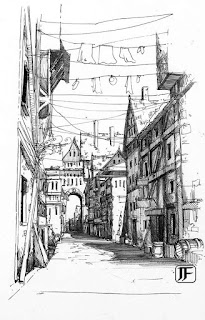 When the group travels to foreign soil, they know they can get some proper pocket money for their destination so as not to raise eyebrows when they arrive or attract unwanted attention.  He'll act as a banker, too, if asked though if you don't make it back from an adventure, good luck to your next of kin who might be hoping to see any of that money.  Usually he has some story, and a witness, that a sizable withdrawal was made just before the passing of said client.  Did I mention he always has a handful of bully boys nearby keeping an eye out for troublemakers?  Portwert rarely sees any trouble.  Of all the NPCs I have ever played, Portwert is a definite favorite and the one I have utilized the most and to the greatest effect.