Nothing is more fun to run or explore, in my humble opinion, than a tomb.  For the traps, the ancient vibe, the undead, and the treasure, nothing beats the bang-for-your-buck impact of a good, tight tomb.  Throw in a religious-related curse and you've got just about everything you need for a well-rounded fun time. 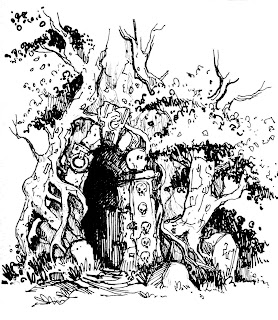 One of the first Swords & Sorcery short stories I read was The Thing in the Crypt.  It was written by L. Sprague de Camp and Lin Carter as part of their pastiche work when they were collecting the Robert E. Howard Conan stories, putting them in chronological order and adding in some of their own to fill in some spots.  Often they used some of Howard's unfinished material but sometimes wrote them completely on their own, together or separately.  I was young and was new to the character and genre, so it didn't matter to me that this wasn't strictly penned by Howard.

As the story goes, Conan escapes captivity at the beginning of the tale, is chased across a landscape by wolves with only his broken chains to fend them off from time to time, and winds up taking refuge in a crypt in some hills.  Within, he manages to get a fire started and discovers the inhabitant of the crypt, a mummified giant of a man with a sword across his knees.  Knowing he will need that blade if he is ever to survive what awaits him outside, he seizes the weapon and gives out a warcry which animates the corpse.  Although he is able to hold the monster at bay, it isn't until he throws it on the fire that it is destroyed.  That story is probably what first caused me to fall in love with the genre and set me on a path I still follow to this day.  It also cemented my love of tombs as a great location for tabletop RPG exploration.