I am sure most folks use this Day 4 topic to mention their favorite published setting or tout the creation of their favorite DM.  For many, it was the first setting in which they gamed and perhaps one they stayed with for most or all of their D&Ding careers.  All good and fair.  But as a homebrewing DM since 1974, I cannot help but love my own setting of Grymvald more than any other.  Self-serving?  Sure and critics be damned!  What started off in design as a meandering dungeon scratched onto graph paper with paper thin distinctions between it and much of what we explored as young teens, my own setting began in-game as a small village with a tavern and a loud-mouthed barkeep who was quick to tell adventurers where the local ruins were.  Under those ruins, he would explain, were passages and chambers with many horrors but opportunities for wealth.  My first DM had made his first dungeon and dubbed it Tantalus, so naturally I followed in a similar vein and called my underworld Tartarus, as a homage to the same Greek Mythos. 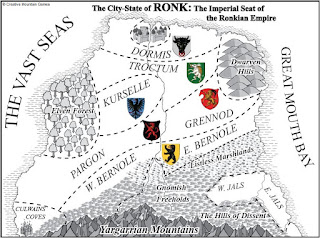 Over time, the world expanded and gained depth and history.  Between campaigns, of which there were many with countless players, I got into the habit early of advancing the timeline from five to fifty years, twice by five hundred years.  This allowed me to think about the nature of the evolving campaign world and form a living history of which many players were at least indirectly a part.This allowed me to expand lineages of the various kingdoms and form an empire overseen by a dominate City-State of one particular group of kingdoms.  I was able to have another empire which was in decay since inception fall further down.  Even one race of goblinoids became a major force in their region which holds true through today.  Many of these things I left to the dice, adjudicating the percentage chance of things but letting the roll be the ultimate guide.  It's been great fun, essentially running my campaign setting as a strategic wargame and civilization game.  Often this was done solo but I always made sure to take into consideration the machinations of players when they were of sufficient magnitude to warrant their inclusion in affecting the outcomes.

Currently, I am running a campaign with a great group of players who meet weekly.  We play board and card games when we don't feel enough players are present to jump into the RPGing, but that still means playing D&D two or three times a month on average.  At the end of the day, it is always the players that make the creation process most worthwhile because nary a decision is made without considering if it will be an enjoyable addition for them to the campaign setting of Grymvald.  They are my guiding influence in all things.