This is a tough one to write.  I've played all editions and like them all to varying degrees, each with their own strengths and foibles.  It's probably safe to say, though, that 1E AD&D is what I have played most.  Original Dungeons & Dragons was my first, of course, but since I played that as a youngster, and there was little to compare it to RPG-wise, it may not be getting a fair shake.  Our main DM at the time was definitely adding in material like Greyhawk, Blackmoor, and Eldritch Wizardy, as well as from periodicals and Judges Guild, to supplement what he was generating on his own.  Also, we started adding in material from 1E as soon as it became available.  So, our (O)D&D games were heavily modified from the original. 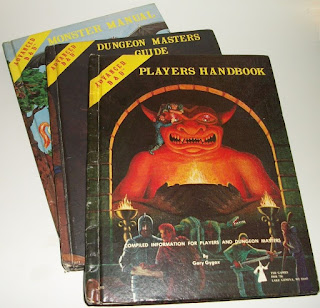 The 1E Monster Manual was released in 1977 and I won a copy through a radio contest on WKRS, a Waukegan, IL, station, that asked fairly simple questions.  I got through on the phone lines immediately and answered their questions about monsters.  I think they expected it to last longer than it did because I recall them seeming surprised that the first person to call had won.  The 1E Players Handbook I bought with money earned from part time jobs.  The 1E Dungeon Masters Guide was also a prize, which I won from the D&D Open at an early Gen Con held at the University of Wisconsin at Parkside.  I later asked Gary Gygax to sign the copy I had and have him personalize it, suggesting he take umbrage over my having not actually paid for the tome.  He was kind to do so. 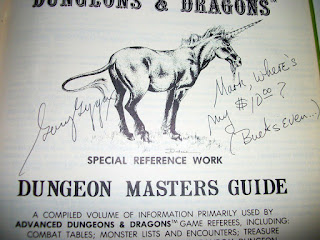 It is definitely the edition I wind up going back to playing, and currently I have a campaign running (nearly) weekly here in Lake Geneva, WI, where I now live.  I've had years of good times and great camaraderie from this game and mostly through 1E AD&D, so let's call it my favorite edition.  And not just because I only paid for a third of my original copies of the books.