When I was revising this list the week before June, I probably should have replaced this question.  Folks that roll a particular number more than average, in this case more than 5% of the time on a d20, either have a faulty die, a selective memory, or simply very odd luck.  I can't imagine that many stories that come from this question are in the majority.  But just so that I can say that I answered all of the 30-Day Challenges, I will say "three."  I will then listen to the holy words of Brother Maynard, "Skip a bit brother," and proceed to simply discuss my dice in general. 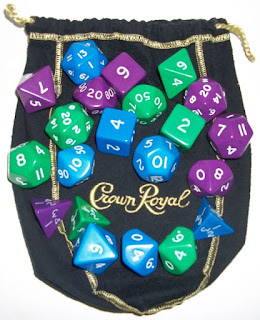 I have two dice bags and a bunch of dice for other types of non-D&D gaming that I won't go into for this blog post.  The first, pictured above, I carry when I know I am going to be a player.  I took it to Nexus with me this weekend and had a blast!  I survived (as far as I know) Jim Ward's Metamorphosis Alpha scenario and continued a 3.XE crawl that began last year with Skip Williams at the helm.  I've had other dice in the past, of course, but this is my current player's bag.  It has three sets of Jumbo Dice from Koplow in green, blue, and purple.  I keep them in a black Crown Royal bag I picked up at an EN World Chicago Gameday (held at Games Plus in Mount Prospect, IL).  They hold three of those gamedays a year and, this one time (not at band camp), "Nev the Deranged" brought a pile of these bags as freebies for anyone who wanted one.  Very kind, Nev! 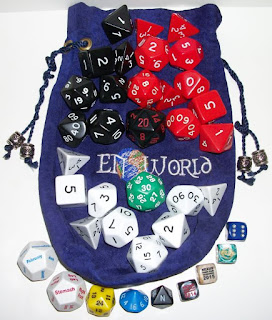 The bag I carry when I am going to DM was also a gift I got at one of the aforementioned gamedays, this time on GM's Day from my buddy Kent Wayson (of the Milwaukee "Kent Waysons").  "Paladin" and "Paladin Wife" of EN World had been making dice bags about a dozen years ago and Kent ordered one of them for me.  Thank you again, Kent!  It has served me well.  In it I also keep three sets of Jumbo Dice from Koplow, this time in black, red, and white, though I have a few exta of the red and white d4s, and a supplemental red d12.  I don't recall the circumstances that prompted those additions; maybe for Magic Missiles? Rounding out the main sets are an extra large black d20 with red numbering and a very large d30 to use with my many d30 tables (including some published in "30 Things Can Happen!").  I've also got some unusual dice and a few extra other dice such as a "month of the year" d12 and a "hit location" d12.  I've got a d24 and d16, the first to generate the hour of a day easily and the latter because it happened to be in a bin next to the d24.  I've got a "compass directions" die and a couple of Nexus d6s, as well as a d6 that my fiend Edwin gave me and a plain one in a swell blue color.  These dice seem to cover my DMing needs nicely.