Over a decade ago, under the Creative Mountain Games name, I published the Toeffrun Creation Myth PDF. In it, I outlined the pantheon of deities used in my Grymvald setting (which I wrote of earlier in this series under "Day 4 - Favorite Game World").  Among the Supernals and Archaics is a vile Mistress of Death know as Nekrem.  She is easily the most feared goddess in my setting.  So much so that peasants, upon viewing a full moon, will make a circle of their thumb and index finger, hold it up to their eye, and mutter, "Her Eye, the Moon."  They do this as a common superstition, a warding off of her evil, to keep themselves from harm.  Many will not even venture out on such a night. 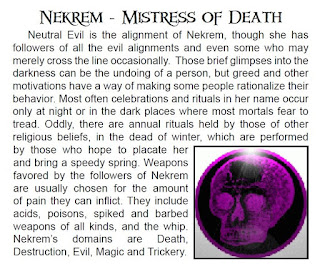 The Kingdom of Toeffrus has long since given way to the Ronkian Empire and its former duchies and baronies have become petty kingdoms in their own right.  They all vie to place one of their own on the imperial throne and some will even enlist the adherents of Nekrem to aid them in their struggles.  Many of her followers are fierce killers, thugs, and assassins ready to do the bidding of some lord or lady if proper tribute is forthcoming for their mistress.  Some nobles will go so far as to convert to her religion in hopes of gaining the continual support of this shadowy cult.  It is also hoped that the cult will not be used by their opponents once the throne is claimed. 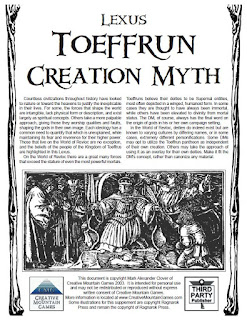 Although this offering was first released during Era 3.XE, ninety-seven percent of it is flavor text, and thus just as useful to any Medieval Fantasy setting today.  And, it is currently on sale here!